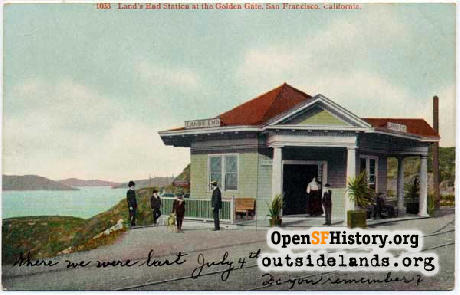 Postcard image of the Lands End Station beyond the Golden Gate., n.d. -

When the United Railroads of San Francisco rebuilt the popular Cliff Line in 1905, they not only converted it from a steam train to electric streetcar operations, they also constructed a new depot near Mile Rock beach to replace a ramshackle shed dating to the 1880s. The new hexagonal station would serve as both a waiting room and a food concession. A wooden viewing platform with benches surrounded the building, and picket fences and planter beds lined the track adjoining the station. A spur track allowed excursion streetcars to park there for extended periods without blocking the main line. This charming little building became a feature in many photographs of the era. At some point (likely in 1905) the concession operator, Charles Harris, acquired either a derelict cable car or passenger coach and set it up as his family residence on the hillside below the waiting room.

Following the closing of the line, the Harris family continued to run their tiny restaurant for many more years, relying for their business on the Lands End trail hikers and the vehicles passing by on the new El Camino Del Mar street above the station site. Mr. Harris, a long-time fixture of the area, became known as the unofficial "Mayor of Lands End." His wife, Goldie, developed a reputation as an untrained but effective lifesaver, and on at least two occasions pulled would-be suicides from the Lands End surf. 1

Photographs taken following the demise of the streetcar line reveal that the hillside beneath the station also began to move, and by the 1930s the station building and adjacent residence had slid about ten feet downhill from their original locations. 2 In 1937, the original Lands End station building finally succumbed to the combined effects of termites, dry rot and land slides, and was demolished by the Harrises.

"Mayor" Charles Harris died in November 1940 but Goldie struggled to maintain the concession stand for another ten months. She continued to live in the family cottage in the converted cable car, but it too was succumbing to landslides and had become a hazard. By 1941 the cottage had reportedly slid 30 feet below its original site. 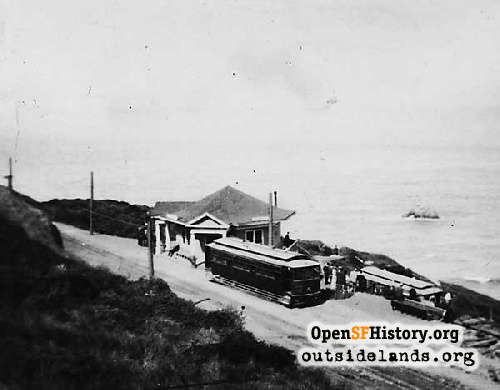 Here's how the San Francisco News reported the end of the Harris era in 1941:

The 35-year-reign of the Harrises has ended at Land's End.

Mrs. Charles L. Harris, widow of the man who was known to thousands of hikers and sight-seers as "the mayor of Land's End," has moved to Oakland to live with her son, Russell.

Mrs. Harris finally had to give up the long fight to save her home on the cliff below the Palace of the Legion of Honor from termites, floods and slides.

Large sections of the old trail that once was the route of the scenic carline to the Cliff House were washed out by the heavy rains of last winter and the winter before.

One of the gullies undermined the little brown cottage and its surrounding cypress trees. The cottage slipped further down the cliff and buckled despite the heavy timbers with which its foundations had been painstakingly bolstered by the Harrises against previous slides.

Wrecked and untenable, the cottage now is 30 feet below its original site alongside the Land's End refreshment stand. There it appears to be poised for a final plunge hundreds of feet straight down into the ocean to join the fast, disappearing wrecks of the freighters Frank H. Buck, Lyman K. Stewart and Ohioan.

Since the widow moved away vandals have helped nature with destruction until now there is little left, but the four walls of the cottage and the picturesque stand where the lemonade bowl, wire-backed chairs and dusty carved piano made a delightful half-way house for Sunday outing parties.

The slides have made this part of Land's End practically inaccessible and given it all the appearances of a ghost town of the Mother Lode. Only a few of the hardiest of hikers go there now. Veteran of these is H.W. Harnish, the 72-year old retired soldier of 6513 California St.

With his cattle dog, "Bud," Mr. Harnish makes the four-mile hike from the Cliff House around to Seacliff three times a week.

Bravely, Mrs. Harris had announced she would continue to live in the lonely spot after her husband died last November. She had grand plans for a little park with tables and benches, shrubs and flowers for those who frequently went to marvel at one of the world's most magnificent views.

Mrs. and Mr. Harris went to Land's End in flight from the fire of 1906, which destroyed their home downtown. There they lived the first few years in an ancient trolley car around which they later built their cottage. The framework of the old car is still distinguishable in the wreckage.

At first they dispensed soda pop, and sandwiches in the small octagonal station that had been abandoned with the carline. But the station was first to give in to the termites and slides and its services were assumed by the converted double garage still standing there with its sign: "LAND'S END."

3. Note that the author used an apostrophe in "Land's End," a punctuation mark no longer used in the appellation.