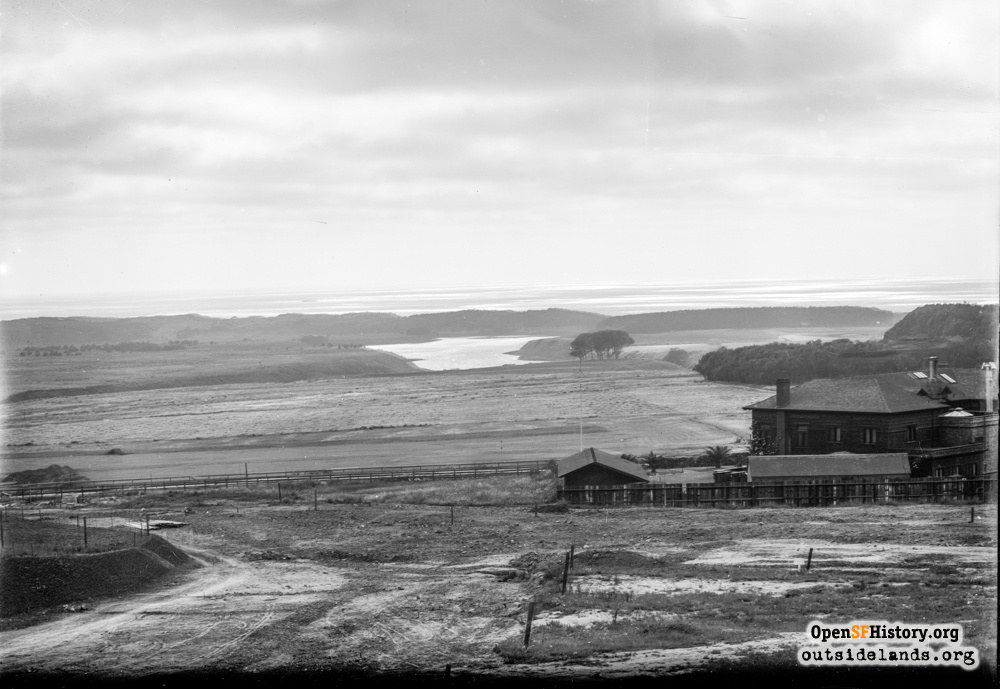 San Francisco's Lake Merced and the neighborhoods around it.

Since the 1850s, Lake Merced and the land around it has been the site of roadhouses, a famous duel, truck farms, and large scale "city within a city" housing developments. Located in the southwestern corner of San Francisco, the lake has been used as a source for the city's water supply and for recreational activities from skeet shooting to golf to dragon boat racing. Thousands live in the relatively new neighborhoods that surround it.

Native people had seasonal camps at the lake before the arrival of the Europeans. Spanish and Mexican ranch owners used the surrounding land for some farming and pasturage. After the arrival of the Americans, roadhouses, small farms, and horseracing track all operated on the foggy land.

In the 1870s, the private Spring Valley Water Company bought the lake and began acquiring the surrounding watershed to sell water to the City of San Francisco. Lake water supplemented sources pumped up from the Peninsula for use as drinking water and for fire fighting. The company leased some ground to small-scale truck farmers for agriculture, sold a section to the U.S. Army for Fort Funston, and rented more acreage to golf clubs in the early twentieth century.

After San Francisco created a municipal water system and bought the lake and water supply infrastructure from Spring Valley Water, the company began selling its watershed land around Lake Merced for 1930s housing developments such as Merced Manor and Lakeside. The city’s Fleishhacker Pool, created in the 1920s, grew to become the San Francisco Zoo.

In the early 1940s, the Metropolitan Life Insurance Company began the creation of the enormous Parkmerced apartment community on the south side of the lake, while the Standard Building Company opened up the Lakeshore tract on the north side. After World War II, the new San Francisco State University campus, Stonestown apartments and shopping center, and Country Club Acres development of single-family homes increased urbanization on three sides of the lake.

Despite all the development, watershed changes, fragmentation, and aquifer reduction during the twentieth century, the lake still remains a unique habitat supporting riparian, dune scrub, and woodland forest natural communities.