Opened: 1909
(on 37th Avenue, between Geary and Anza, where the Anza Branch Public Library stands.)

"The yard was planks, and kids would lose nickels and dimes between the boards. When they tore the old school apart we did a lot of fishing in the sand for nickels and dimes!
---Walter Borman 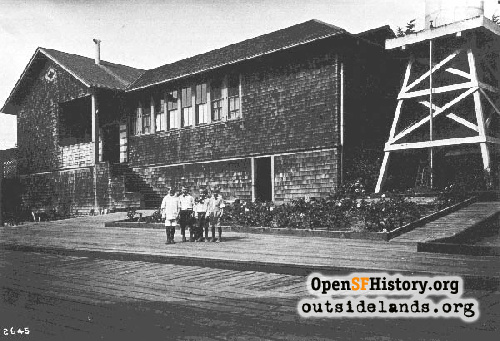 The original Lafayette school, two shingled buildings that faced each other across a yard, was built in 1909, replacing a namesake school that burned at Filbert and Kearny streets in the 1906 earthquake and fire. Heated by stoves, with its own water tank, the school occupied a windy, sandy hillside where the Anza branch of the San Francisco Public Library now stands. As Mr. Borman rightly remembers, the yard was covered in wooden planks to make it passable. 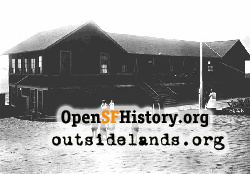 The principals of this old Lafayette School were Mary McLeren (who later acted as principal at Argonne School) and Miss Ida M. Kervan, who, according to the Richmond Banner "kept the little wooden school house together during all the years when its wretched physical condition served as the leading argument for erection of modern schools throughout the city." Miss Kervan retired in October 1925, leaving new principal Elizabeth E. Hauselt to usher in a new school building and location.

The current school building was built of reinforced concrete finished in stucco with terra cotta trim and cost $385,197 in 1927. The official dedication took place on February 6, 1927. Mayor Rolph attended briefly and representatives from three neighborhood improvement clubs brought gifts (two American flags and a portrait of Lafayette). After a flag-raising and music by the Lowell High School band ("Star Spangled Banner" and "I Love You California"), tours were given of the new building. The Richmond Banner of February 11, 1927, reported: "The most interesting feature of the school's 'open house' was 'Our Neighborhood,' a community project of the thirteen kindergarten-primary classes, in which the pupils constructed by various devices representations of points of interest in Golden Gate and Lincoln Parks." 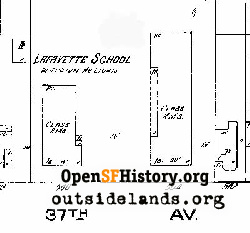 The Banner also mentioned that many people felt the only thing that marred an excellent program was the rain. Editor S.G. Trimble replied:

"Why, it was glorious that it rained! It refreshed a memory of America's struggle for independence and the noble valor of Lafayette!

"It was the fortitude of Washington and his men in the darkest hour of the struggle, amid the rain and snow and cold of the closing days of 1776..." [many more paragraphs in this vein follow, until:]

"Yes, it rained Sunday when we dedicated our beautiful new Lafayette School within sight and sound of the mighty Pacific, at the end of a nation's march, but it was not long after old Glory had risen to the top of the mast in the schoolyard that the sun shone forth upon the waters and the land, a sun that must have resembled very much 'October's clear and noonday's sun' that shone the morning Lord Cornwallis surrendered at Yorktown.

"The Lafayette School dedication Sunday was but an allegory of the struggle for American independence, in which the man for whom it was named played such a brilliant part."