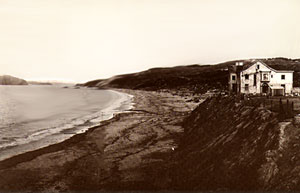 Every April, many of us dwell upon a terrible disaster (besides our tax returns): the Great Earthquake and Fire of 1906. The 65-second temblor struck our fair city in the early hours of Wednesday, April 18. The raging fire that followed left four square miles of destruction.

Although my family, in Idaho at the time, had little knowledge of the event, our late friend Phoebe Brown and her family lived through the disaster and dealt with it bravely. The Brown family lived in a lovely, well-appointed home on Van Ness Avenue. After the powerful jolt struck---it was later determined to be 8.0 on the Richter Scale---the Browns' house was still standing, but listing to the rear. All its contents--the furniture, china, portraits---had been thrown to the floor and shattered. But luckily, none of the family members was harmed.

Within minutes of the quake, the city's residents realized that few of the conveniences they depended on---gas, electricity, telephones, elevators, even streetcars---were working. More importantly, the water lines had been cut, so water to drink, and water to stop the fire that was devouring the wooden buildings downtown, was in short supply. Fire Chief Dennis Sullivan was unable to lead the fight against the spreading conflagration because a chimney had fallen on his bed during the quake, breaking both his legs. (His even less fortunate assistant had been killed instantly.)

At Midday, the residents of Van Ness Avenue watched anxiously as the billowing flames drew closer, and Mayor Eugene Schmitz was forced to dynamite rows of Victorians to prevent the inferno from claiming the entire city. San Franciscans were given short notice to gather their most precious possessions and join the mass of humanity, carrying, pushing, and pulling what was left of their worldly goods.

Phoebe Brown was just a toddler at the time, so she later said she barely remembered the quake. Her parents and two older brothers came away with much stronger impressions, however. her mother, Helen Hillyer Brown, wrote a vivid account of their experiences, intending to send it as a letter to worried friends and relatives.

Helen Brown described how the family piled their belongings into a light horse carriage called a Victoria (after Queen Victoria). It seated two, with a folding top, and was strong enough to carry two loads of the Browns' household goods to higher ground. She also wrote that all of the parks (including Dolores Park in the Mission) were turned into tent cities, with both the Army and civilians acting as overseers to enforce health and safety rules. Fortunately, the weather was mild, and the people remained in good spirits.

Phoebe's father, Phillip King Brown, was a physician. After he learned that his downtown medical office had gone up in flames, he took over an empty house to care for the injured, aged, and infirm victims of the quake. His wife helped to gather the names of the living, for hundreds (674, according to early reports) were either dead or missing, and 28,000 buildings were destroyed.

Amazingly, the city made a rapid recovery from the devastation, and within two years, in 1908, the Brown family moved into their new home, the first residence built on the bluff at Sea Cliff, overlooking Baker Beach and the inlet to San Francisco Bay.

Leo and I first visited the house about 50 years ago, when Phoebe Brown, whom he'd met while working for the San Francisco Planning Department, invited us to dinner. Phoebe loved to entertain and was a gracious hostess.

I recall how we wielded the heavy oak bronze knocker on the massive oak front door. Upon entry, we were struck by the elegance of the large rooms. the bookcases were filled with leather-bound volumes, and the floors were covered with luxurious patterned carpets (like the kilims at Nomad Rugs or Artemisia on 24th Street).

There were art objects from all over the world in the living room, but the one that caught my attention was a painting in an ornate gold frame over the fireplace. It was an oil that depicted a hillside of golden dried grass with a barely trodden, meandering path and a few oak trees in the background. When I told Phoebe how much I admired the tranquil scene, she happily revealed the painting's history.

The landscape had been given to her father and mother as a wedding present by the artist, William Keith, who was a personal friend. The framed painting had been hanging in their sitting room that fateful day in 1906 when the order came to abandon their home on Van Ness Avenue. Transporting such a heavy, unwieldy object was out of the question, but the thought of allowing this treasure to be blown up was too painful to bear, so Mrs. Brown cut the canvas out of the frame, rolled it into a tube, and tucked it under her arm, saving it for posterity.

William Keith, born in Scotland in 1839 (he died in 1911), was an extremely popular and prolific painter in California. He often went on mountain trips with his friend, the naturalist John Muir. Muir used to chide his artist friend about taking liberties with Mother Nature, because Keith felt obliged to move or omit a tree in order to improve the composition of his paintings.

You can find William Keith's work in most California museums. In fact, I made a point of taking one last look at his painting of a glorious sunset shining through a stand of oak trees, before the de Young Museum closed for retrofitting last December.

Though she never married, Phoebe Brown attained great stature as an architect and lived a rich, full life. She was active in so many causes that photographer Ansel Adams once noted that whenever there was some important civic or environmental issue pending you would find Phoebe Brown in the middle of it and on the right side!

Throughout her bust life, various friends and relatives asked for copies of her mother's earthquake account, which she provided in handwritten form. This chore became so time-consuming that she finally decided to produce it in type. In 1956, she engaged my man Leo to design and print The Great San Francisco Fire, by Helen Hillyer Brown, on his printing press in our basement. It was so well received that a second printing, in 1976, was done by our son Eric, at his print shop on Mission Street near 30th.

The book is now "out of print" and sadly Phoebe is no longer with us to order another edition. She died in 1990 at the age of 86.

With her going, the Brown home was sold to a man from the East Coast, then resold to a couple who have established deep roots in our city, none other than San Francisco Chronicle editor Phil Bronstein and his wife, actress Sharon Stone. (You will not be able to recognize the house today using the old photograph shown on this page, because other large homes of distinction have sprung up all around it.)

Nevertheless, I'll always think of the house as Phoebe and her family's refuge and reward after surviving the Great Quake of 1906.


Image: One 25th Avenue in 1908 by Phoebe H. Brown, courtesy of Leo and Florence Holub.