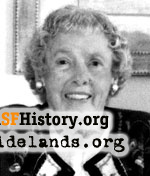 I scanned my daily newspaper seeking a topic for my next paper to present at my creative writing class. An enticing headline greeted my quick scanning eyes. I read with amusement "old-fashioned dance cards revived." Mention of dance cards brought back many memories for me but most of all for the event of my very first formal dance.

After attending a parochial school, St. Anne's, in San Francisco with the same boys and girls for eight years, it was time to graduate and move on to high school. Selecting a high school presented several choices as many long time friends would now be going separate ways, perhaps even to be forgotten while pursuing new experiences. In order to keep this from happening, some wise mothers encouraged the girls to meet regularly at each others' homes. They formed a social club for those who expressed an interest.

A group of sixteen girls assembled soon for the first meeting. this group remained together for several years, even as some married and moved from the Sunset District to seek more sunshine and the warmer climate of the peninsula. The club eventually just dwindled away due to the uncertainties of our country being at war as well as the daily concerns of raising growing families.

During the early period of this social club we shared many well-planned events with the help of our parents. It was not long, though, before the group was taken over by a few of the more sophisticated teens who were guided by the activities of older sisters. 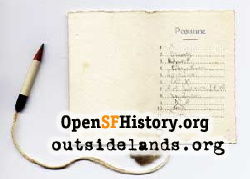 I was sixteen when the first exciting event was planned, a formal dance, and a first for most of the club members. As soon as the suggestion was made to the group, plans were facilitated without further debate. This was at the height of the Great Depression but that did not seem to be a matter of concern to these girls. The small insider group began to make firm commitments. No votes were taken and no one objected to their plans. The first thing they did was ask the members to contribute a set amount of cash. I do not remember how much our parents came up with but it was apparently enough and I do not rmemeber it being a problem.

Soon a date was set and a small neighborhood clubhouse, the Forest Hill Club House was reserved. At that time, Forest Hill was a new development and the club house was to lure buyers to this exclusive area of San Francisco. Several small dance bands were auditioned and interviewed. One whose fee was thought to be reasonable was quickly hired. Now our club was definitely committed. The fun had begun in earnest.

What to wear to this new kind of an occasion was uppermost in everyone's mind. Naturally, such a dance required a formal dress at least for the girls. This was the number one topic for days on end.

My mother and I made several trips to downtown San Francisco to find just the right dress for me. She had never been to a formal dance and wanted me to have all the necessary finery for a successful evening. After many hours of try-ons we finally found a lovely pink taffeta full length dress of many ruffles. It had a narrow blue velvet ribbon encircling my waist. I loved the dress and was thrilled when my mother presented me with a lovely powder blue bead necklace and small matching earrings to wear with it. All our shopping was done at O'Connor and Moffat, one of the large department stores at that time, now occupied by Macy's.

With all the shopping done, the big question now was who was going to escort me on this momentous occasion. I was filled with anxiety at the thought of having to ask a boy to take me. It would be necessary to phone him to make the date. i had never ever called a boy at any time.

It was not the fashion in those days to have a "steady beau" and I really did not know any fellows that could be considered a "boyfriend." I had many acquaintances and pals on my street but to ask them to take me to a dance? No way.

After much discussion with my girlfriends and taking heed of their prodding and advice I asked a boy from my grammar school days that had always shown some slight interest in me. Now and then, he would pedal for several blocks on his bike just to ride past my house but he had never stopped.

Much to my relief he did accept when I nervously phoned my invitation. As boys his age were not necessarily driving yet, parents took over and became chauffeurs for practically all the dancers and guests. Parents served a chaperons too and provided a buffet of punch and cookies.

The planners of this event really did an excellent job and we all had a wonderful time. As a memento of the occasion dance cards had been professionally printed. One was presented to each girl on arrival.

Dance cards in those days were usually made of paper with pretty designed cover bearing the date and name of the event. Often a small pencil was attached by a cord to the card for signing convenience. The number of dances was listed. One's escort reserved the first and last dance. He then filled the rest of the card with the names of other male dancers, his friends and acquaintances, with whom partners would be exchanged at the proper time.

Girls saved these cards usually placing them on display around the dresser mirror in their bedroom.

(Rosemarie Marshall Green was an active WNP member who passed away on June 17, 2007. She was born in 1915 and grew up on the 1200 block of 16th Avenue in the Sunset District. You can read another story by her.)