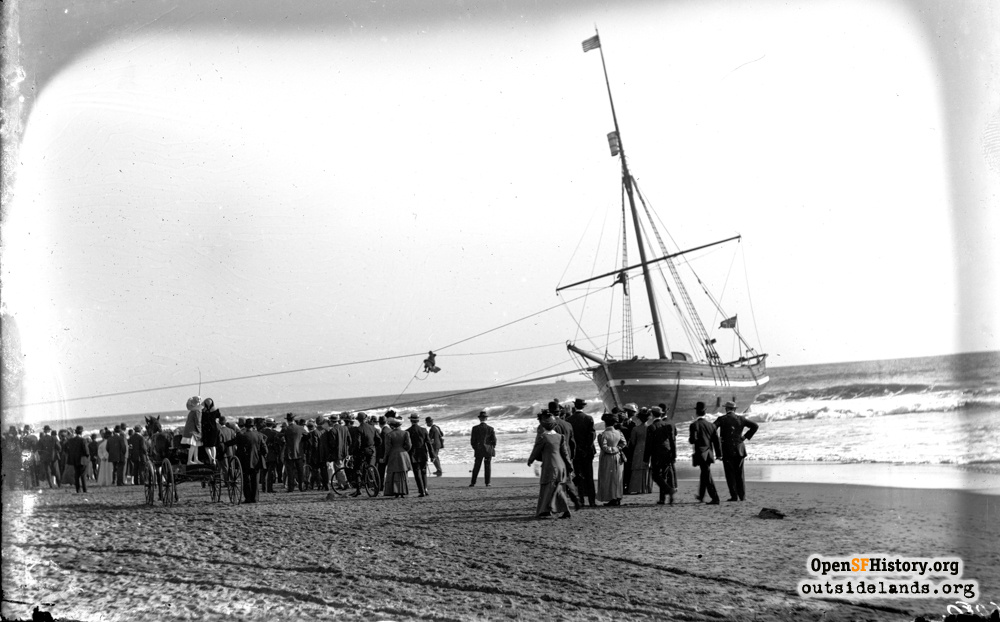 The Gjoa in Golden Gate Park

A historic sloop that came through the Northwest Passage before going on display in Golden Gate Park.

The Gjøa, through the Northwest Passage to Golden Gate Park

In the early 1970s, Dagfinn Kvale, who was the pastor of San Francisco’s Norwegian Seaman’s Church, took a few visiting sailors to the outer edge of Golden Gate Park to view a piece of history connected to a Norwegian national hero. 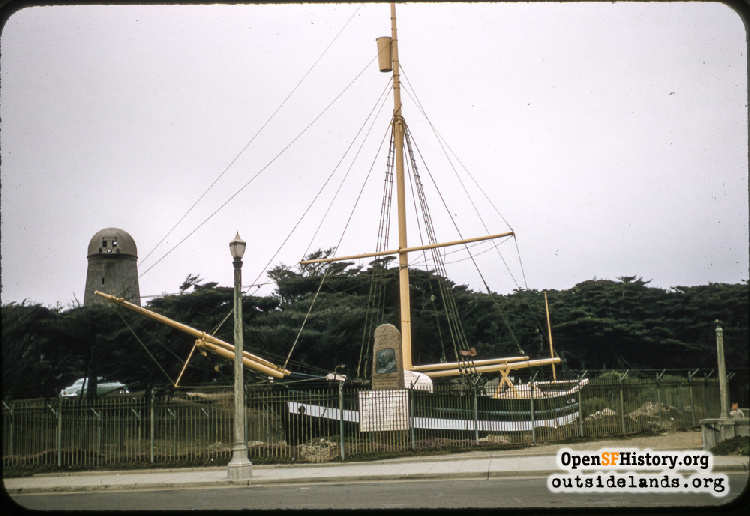 Golden Gate Park, Roald Amundsen's Gjoa was the first ship through the northwest passage in 1906. Donated to San Francisco, she was displayed at the west end of Golden Gate Park from 1909 to 1972, when she was returned to Norway. Dismantled Dutch Windmill at left, circa 1955 -

Just north of the closed Beach Chalet and in the shadow of the decaying, spar-less Dutch windmill, an old sloop, the Gjøa, sat with its prow pointed west at the waves of Ocean Beach. This craft was the first to navigate the Northwest Passage, traveling from the Atlantic to the Pacific through the Arctic ice.

A rusting metal fence surrounded it, but there were large holes one could step through, and more disconcerting was another hole in the hull of the ship. Inside, the group of visitors found evidence of campfires.

"The hippies had a special sense of appreciation for Gjøa,” Kvale recalled later.

“They liked to climb the rig and found out that the vessel was an ideal place for overnighting. […] One hippie told us what a great pleasure it was to touch the ship’s frames, experiencing the voyage through the Northwest Passage on a LSD trip." 1

The Gjøa (the pronunciation of which the San Francisco Call newspaper often insisted could only be obtained by hearing a Scandinavian say it 2) started life a simple seal- and walrus-hunting vessel and was named after the wife of the builder. In 1903, Roald Amundsen bought the sloop and equipped it with a gasoline engine in preparation for traversing the top of the globe from Greenland to the Bering Strait, with hopes of tracking any shift of the magnetic north pole along the way.

This was the era of heroic exploration: perilous voyages undertaken to be the first to visit poles, cross mountain ranges, or see the source of mighty rivers. Motivations included scientific research, personal fame (plus riches to be gained from writing books after the feat), and nationalistic bragging rights. Amundsen would prove to be the most successful of Arctic explorers, and his voyage with the Gjøa launched his worldwide fame.

In December of 1905, telegraphs received by the Norwegian consul in San Francisco confirmed that Amundsen and his crew had successfully arrived in Alaska.

The hunt for a Northwest Passage had begun with European explorers in the 16th century. Sebastian Cabot, Henry Hudson and James Cook all tried to discover a quick sea passage between Atlantic and Pacific.

By the time Amundsen and his crew set off with the Gjøa, the world was resigned to accept that heavy ice made a commercial route impossible, but the unmet challenge of discovering a way across the top of the continent gnawed at the pride of adventuring seamen. So Amundsen’s triumph was emblazoned on the pages of the world’s newspapers, and was especially celebrated in Norway. The country had just won official independence from Sweden, and now had a bone fide national hero to fete.

Rather than sail the small and slow Gjøa back around the continent to return home, Amundsen planned from the beginning to end his journey in San Francisco, leaving the tiny craft behind to grab a train east. After recuperating most of the year in Alaska and Seattle, the Gjøa was scheduled to arrive in San Francisco in October 1906. The face of the great city of the west had changed markedly after a devastating earthquake and fire in April, and while still in the very early stages of rebuilding, San Francisco was proud and excited to celebrate the great Amundsen. 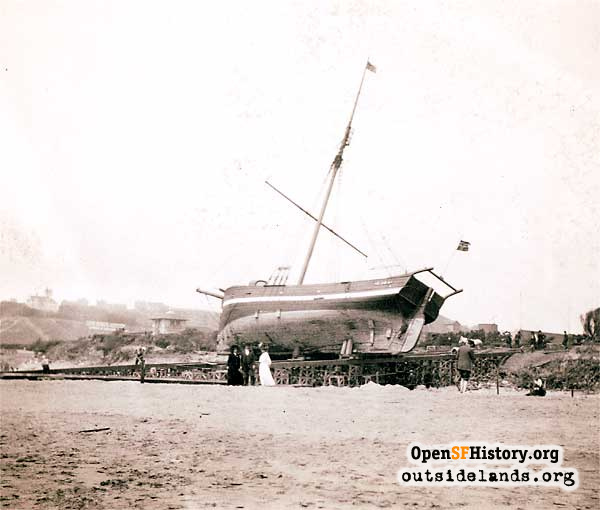 The Gjoa, Roald Amundsen's ship, being dragged up a timbered slide to its resting place in Golden Gate Park, July 1909., 1909 - Photo by Fernando Cortez Ruggles

To the chagrin of the region’s Norwegian community, which had been planning a lavish maritime welcome for the Gjøa as it entered the Golden Gate, Amundsen sneaked into the Bay Area by train ahead of his boat and tried to keep a low profile in Oakland. Found out, he gamely played along with the celebrations, meeting his crew and reboarding his boat just outside the harbor line, accompanied by dignitaries, consuls and representatives from the Norwegian and United States governments. Receptions and dinners followed over the next week before Amundsen boarded his train for the East Coast. 3

Despite rumors that a Seattle syndicate had bought the Gjøa for $20,000 to display at the Alaska-Yukon-Pacific Exposition of 1909, the humble boat was taken to Mare Island where the Navy posted guards against anyone inclined to strip a souvenir from the craft. The San Francisco Chronicle noted that the Gjøa would need major repairs to be seaworthy again, and considered it likely “she will be disposed of in this port.“ 4

While Amundsen went on to more celebrated achievements, leading the first expedition to make it to the South Pole in 1910, and the first blimp flight over the North Pole in 1925, the Gjøa was saved from its muddy moorage near Vallejo to become a monument in Golden Gate Park.

The Norwegian consul asked the Park Commission to take possession of the ship, and the commissioners agreed. On July 6, 1909, an estimated 5,000 spectators crowded Ocean Beach to watch the Gjøa being towed onto the sand and eventually a ramp by cables (some jokingly hung their wet stockings on the cables as the work proceeded). She was situated just near the Life Saving Station where the San Francisco Call predicted she would stand “until her mighty timbers rot. That will be 200 years or more.“ 5

The number of people in the teeming crowd who carved their initials into the vessel’s side implied a less-optimistic prognostication for the Gjøa’s longevity. Souvenir hunters and vandals necessitated a fence be erected and a caretaker hired — the gentleman lived in the ship and was enumerated there during the 1910 United States Census. 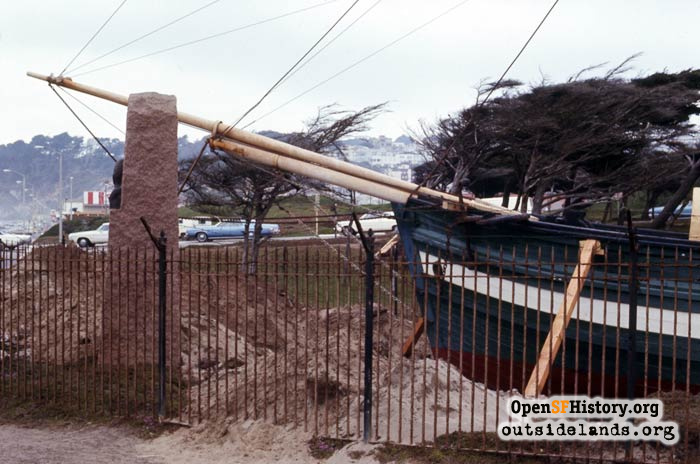 The Gjoa, Amundsen's sloop that traveled the Northwest Passage before being parked in Golden Gate Park. 1970s - Photograph by Dennis O'Rorke

The city installed a seal tank behind the stern of the ship and, according to the Call, the Alaskan fur seal that occupied it acted as an additional nighttime guardian of the boat: “A seal can bark about as well as a dog, and when the pirates may attack […] the faithful seal will bark its bullet shaped head off in warning.“ 6

After a few years, some believed the meaning and significance of the ungainly ship had become lost to the public who passed it. To address this concern, a stone monument commemorating Amundsen was erected beside the vessel in 1930. It still stands today on the north side of the Beach Chalet.

The Gjøa survived the explorer who brought it fame — Amundsen disappeared during an Arctic rescue mission in 1928 — but it deteriorated over decades of sitting in the open air at Ocean Beach. Occasionally, the city would be spurred to make repairs and give the Gjøa a paint job (a 1968 visit to the city by Norway’s King Olav provided motivation for one such spruce-up), but generally the vessel that survived the crushing ice of the Arctic seas was a helpless victim to neglect and vandalism.

After an outcry in Norway over the ship’s derelict and declining condition, a Norwegian foundation made a deal with the city in 1972 to move the Gjøa to a museum in Oslo. There it was “restored” to the extent that only the keel and ship’s bottom are original, but it looks impressive on display again, even without attendant LSD-dropping hippies.

More on the Gjøa in this article by Hamilton Barrett.

1. From a 2006 article by Kvale in tribute to the centennial of the Gjøa's voyage.