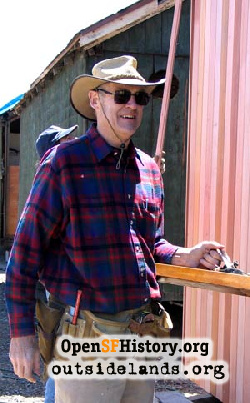 John Freeman uses a century-old tool while working on an earthquake shack on June 11, 2005. - WNP Photo

We honored a very special member of our organization with the Summer 2007 issue of the member newsletter. What hasn't John Freeman given to the Western Neighborhoods Project? We are the frequent beneficiaries of his research and writing abilities. He offers us extensive use of the historical photos, newspapers, ads, and western neighborhoods ephemera from his private collection. If that isn't enough, John almost single-handedly resuscitated our efforts to restore a 1906 earthquake shack with his carpentry skills and leadership.

John was born and raised in the Richmond District. The only time he lived anywhere else was to buy his first home in the Sunset, lasting there only 2 1/2 years before selling to buy a larger home back in the Richmond. He attended Frank McCoppin Elementary, Star of the Sea, and St. Ignatius High School. He still gets together with a group of guys from his 1950s car club for a yearly picnic alongside the Pioneer Lodge in Golden Gate Park.

"We called our "car club" (everyone had to have a car club in the '50s - but we didn't have any cars) the Lairds. There were a few other similar clubs in the neighborhood like the Leaders and the Vanahays. Our common bond was hanging out at McCoppin's schoolyard. Some guys had come from Star [of the Sea], but we were adolescent punks. Many attended (loosely interpreted) George Washington High School."

John majored in history at the University of San Francisco, but when he applied to the USF School of Education an advisor encouraged him to get a minor that would always guarantee a job. "In a post-Sputnik world, math and science were 'hot', so I started taking math courses. I taught both subjects in a junior high school, but it wasn't long before math trumped history."

For 35 years John taught in the San Francisco Unified School District, the last nine at George Washington High School. When he retired in June 2001 he revisited his interest in history.

"A term paper I had done a cursory job with in 1962 was my main motivation. It was on the reconstruction of San Francisco after the 1906 earthquake and fire. That topic has been my main focus of research since I retired, so quite naturally the housing boom after the earthquake in the Richmond District is related to the larger theme of reconstruction."

John's knowledge of the reconstruction period led him to serve as historical consultant for the Oakland Museum's earthquake centennial exhibition, Aftershock!---Personal Stories from the 1906 Earthquake and Fire. He acted in a similar role for the "Chutes" section of the San Francisco Museum and Historical Society's Amusing America exhibit.

In addition to the articles he's published in our newsletter and Web site, John has contributed articles for San Francisco's Architectural Heritage Newsletter, the San Francisco Museum & Historical Society's, The Argonaut, and to that organization's on-line Encyclopedia. He has also been an active member and writer for the San Francisco Bay Area Post Card Club.

"The period from about 1905 to about 1915 was called 'The Golden Age of Postcards' and it fits perfectly into my area of research. It was a time when the telephone was in its infancy, so few people had phones, but for a penny stamp, you could send a message on a postcard. It is amazing how much history from those years was recorded as images on postal cards. The completion of new buildings in San Francisco was proudly depicted on postcards. All kinds of the local parades were recorded on postcards. The social issues of the day were found on postcards."

John and Alanna---his wife of 43 years and a 4th generation San Franciscan---still live in the Richmond, although their two sons (with two grandchildren each) have left for Los Angeles and Montreal.