The San Francisco VA Medical Center occupies a twenty-nine-acre campus in the northwest corner of San Francisco, California, between Point Lobos and the Golden Gate. 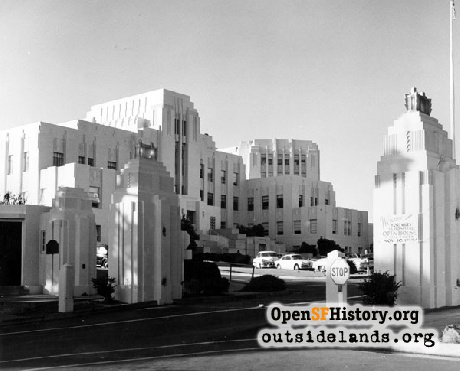 In 2002, the Department of Veterans Affairs commissioned the firm of Page & Turnbull to do a historical and architectural assessment of the San Francisco VA Medical Center at Fort Miley. The author of the report, Christopher VerPlanck, has kindly give us permission to publish excerpts. Read also Mr. VerPlanck's excellent article on the Social and Architectural History of the Richmond District.

The San Francisco VA Medical Center occupies a twenty-nine-acre campus in the northwest corner of San Francisco, California, between Point Lobos and the Golden Gate. The campus enjoys dramatic views of the Golden Gate Bridge to the east, the Marin Headlands to the north, the Pacific to the west and the San Francisco's Richmond District to the south. When it was completed in 1934, the San Francisco VA Medical Center consisted of twenty-one concrete buildings designed in the "Mayan Deco" style. These were clustered in the northern and eastern sections of the lushly landscaped campus in order to lessen the impact of the adjacent neighborhood, as well as to provide space for patient convalescence and recreation. Several major building campaigns during the past forty years have dramatically altered the semi-pastoral character of the campus by adding over a dozen non-contributing buildings.

The Point Lobos/Lands End district of San Francisco has witnessed a considerable amount of history prior to the construction of the VA Medical Center. Archeological sites have been discovered to the west of the campus, near the Sutro Baths ruins, providing evidence for the existence of seasonal Native American settlements within a mile of the VA Medical Center campus. The area now comprising Point Lobos was located within the boundaries of the lands controlled by the Ramaytush tribelet, a subgroup of the Ohlone tribe. Although they did not have any permanent villages in the area, they used the coastal area around Point Lobos for seasonal camps inhabited during shellfish gathering expeditions. These remains, located within the Point Lobos Archeological Sites National Register district, consist primarily of shell middens. No cultural resources associated with the Native American period have been discovered on the VA Medical Center campus. This is perhaps not surprising considering that seasonal shellfish encampments were typically located close to the shore.

During the late Mexican and early American periods Point Lobos belonged to a man named Francisco Guerrero. He had been granted this vast rancho by the last Mexican governor of California, Pio Pico. In 1850, shortly after California achieved statehood, President Millard Fillmore set Point Lobos aside for military use due to its strategic location on the western approach to the Golden Gate. Nevertheless, within a year Fillmore rescinded this appropriation and the land reverted to the ownership of Guerrero. For almost two decades the land remained unoccupied and unused with the exception of a semaphore signaling station, which appeared on contemporary maps as early as 1853. After spotting a ship, the staff of the signaling station at Point Lobos would telegraph an advance warning to their counterparts at the semaphore station on top of Telegraph Hill. The staff of the latter facility would then sound the horn to give San Franciscans advance warning of the impending arrival of a ship through the Golden Gate.

Believing that the close proximity of cemeteries to residential districts was unhealthful, San Francisco authorities began searching for remote tracts of land in which to bury the city's dead in the 1860s. In 1868 the city purchased 200 acres of land at Point Lobos, including the site of the future VA Medical Center, for $127,465. This tract was designated a municipal cemetery. For the next quarter century Golden Gate Cemetery provided a place for poor and working class San Franciscans to bury their dead. Many of the city's ethnic groups laid claim to various sections of the cemetery. Golden Gate Cemetery also had a "potters field" where the city would bury its indigent citizens. It is unknown whether any remains survive beneath the present-day VA Medical Center. According to contemporary sources, when the cemetery was converted into a military installation the remains were all carefully exhumed and reinterred in Colma.

In 1890 the U.S. Army began to systematically modernize and reconstruct its outdated coastal defenses. Known as the Endicott Period, this system entailed the construction of networks of coastal batteries at the approaches to important harbors and coastal cities. These networks of coastal defense facilities were designed to thwart potential seaborne invasions by ensuring that the field of fire would saturate every square foot of sea approaching a critical seaport or harbor. For San Francisco Bay, the Army Corps of Engineers planned coastal batteries for Point Lobos, the Marin Headlands, Alcatraz, Fort Mason and other strategic points around the Golden Gate.

In January 1893, the U.S. Army paid the City and County of San Francisco $75,000 for fifty-four acres of strategically situated Golden Gate Cemetery land overlooking the approaches to the Golden Gate. Construction did not begin right away, however. According to contemporary newspaper articles all of the graves first had to be exhumed and reinterred elsewhere. Construction of the Reservation at Point Lobos, as it was originally called, did not begin until 1897. The first buildings constructed included a half-dozen wood-frame barracks, storage buildings, an officers' club, and administrative buildings. Most important were the batteries themselves. Fort Miley would eventually include several distinct clusters of fortifications, including Batteries Chester, LaRhett, Livingston, and Anton Springer. In 1900 the post was renamed Fort Miley in honor of Lieutenant Colonel John D. Miley. Miley, who had recently been killed in the Philippines, had been largely responsible for the actual planning of San Francisco's network of coastal batteries.

In 1902 Fort Miley was officially completed and garrisoned as a subpost of the nearby Presidio of San Francisco. In 1932, twenty-nine acres of Fort Miley were acquired by the Veterans Administration for the construction of a new veterans medical center. Two years later most of Fort Miley, except for the batteries, was demolished. Approximately ten barracks buildings, a mess hall, officer's club, stables and miscellaneous storage facilities were torn down to make way for the hospital and subsidiary buildings. The batteries at Fort Miley continued to operate until 1937 when plans were made to decommission what was left of the installation when it was realized that air power had rendered coastal batteries obsolete. Nevertheless, the Japanese attack on Pearl Harbor on December 7, 1941 led to the reactivation of Fort Miley. New anti-aircraft guns were added and the post was garrisoned until 1943.