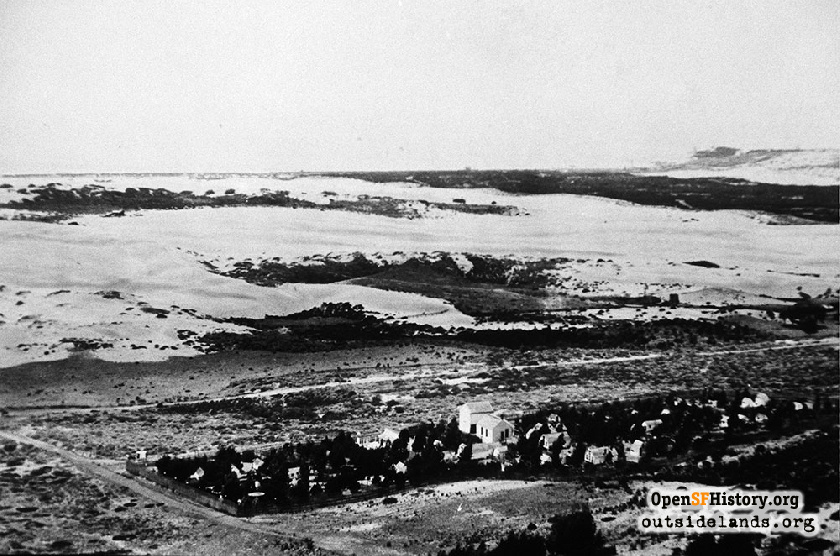 Dynamite Factories in the Sunset District

San Francisco's Sunset District was home to some explosive businesses in the 1800s.

Dynamite Factories in the Sunset District

Farms in Berkeley? Probably an urban legend. Dynamite factories in the Sunset? A historical fact. And not just one, but two.

Dynamite is nothing more than nitroglycerin, an explosive and unstable element, with an additive making it safe to handle and transport. Before the discovery of the stabilizing agent, a plague of explosions resulted in a worldwide ban on transportation of nitro. Even with the addition of the stabilizing agent, the manufacture of the raw explosive had to be carried out far away from populated areas.

San Francisco’s first dynamite factory (called powder works because other explosives, including gun powder for cartridge shells and blasting caps to ignite the dynamite, were also manufactured there) was the Giant Powder Works on San Jose Road (today’s San Jose Avenue) between St. Mary’s College and the Industrial School (now the sites of St. Mary’s Park and Balboa Park/City College).

That part of San Francisco was sparsely populated in the late 1860s, but not sparsely enough. On the night of November 26, 1869, the inevitable occurred; an explosion destroyed the works, killed two workers, and severely injured eight others. The nearest neighbors were 200 yards away, but debris was hurled 400 yards.

In the 1870s the land today occupied by the Sunset District was an uninhabited, uninviting expanse of sand, wind, and fog—an ideal place for dynamite factories.

The Giant Powder Works relocated to the Treat Tract, approximately twenty-five acres off today’s 19th Avenue between Kirkham and Moraga Streets and 19th and 23rd Avenues. Also setting up shop in the wide-open spaces was the California Powder Works, which found a home on a 120-acre parcel of land in today’s Inner Sunset called the Byfield Tract. Maps don’t exist showing the exact location of the California works, but the area around 2nd Avenue and Irving Street is the most likely site. 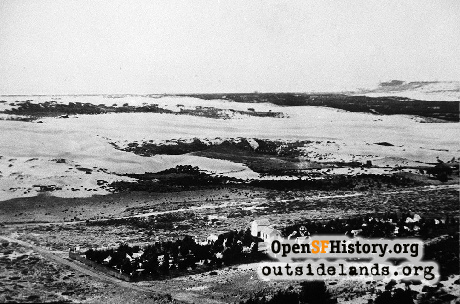 With the exception of a couple of civic outposts—the Alms House and the pumping plant at Laguna Honda—there were no backyards near the explosives works. Another asset was the Central Macadamized Toll Road that meandered southwesterly along the path of least resistance through what would someday be called the Sunset District to Lake Merced. Also called the Powder House Road, it was a wide, smooth thoroughfare that provided a means of bringing the raw materials to the powder works and transporting the finished products to the waterfront for shipment to the interior of the state.

The California Powder Works announced its presence in the Inner Sunset on the foggy morning of July 9, 1870, with an explosion that was heard ¾ mile away. The blast occurred in the building where blasting caps were prepared, killing one worker, seriously injuring two, and completely destroying the structure.

Two incident-free years passed within the perimeter of the works, but outside the fence the city was encroaching. Golden Gate Park was taking shape two hundred yards to the south and Laguna Honda School was built on 7th Avenue between I (Irving) and J (Judah) streets. Families were moving in and, oddly, many saloons were opening their doors near the dynamite factory.

On June 21, 1872, at 6:15 p.m., a strong shock, followed by a thunderous clap, rattled the windows of every house in the city. Startled residents, believing that it was an earthquake, ran into the streets. A witness near the California Powder Works reported seeing a huge column of white smoke shoot hundreds of feet into the sky seconds before he was knocked down and rendered senseless for several minutes.

Word reached police headquarters an hour later. When rescuers reached ground zero two hours after the incident, they found a crater in the sand 12 feet deep and 50 feet in diameter where the glycerin house had been. Between 1,500 and 2,000 pounds of glycerin had exploded, destroying all six buildings on the site. One newspaper described the site as “a waste—a deserted wood yard with only the chips left.”

The fences along the Powder House Road, a nearby saloon, and an outlying house all suffered less-extensive damage.

It was feared that such a huge explosion could only mean massive casualties, but fortunately all the workers had left for the day an hour before the explosion. Nobody had been on the grounds.

The powder works was rebuilt, and six months later, on December 21, 1872, what the San Francisco Chronicle termed “the semi-annual explosion” occurred at 2:40 p.m.

The unintentional detonation of 300 pounds of nitroglycerin was heard miles away. A 190-by-60-foot building completely vanished, pieces of lumber from it launched up to a mile away. Witnesses on the Point Lobos Road, two miles away, saw the roof of the shed sail more than 200 feet into the air.

Two workers were instantly killed, with one body found 600 feet from the site. Adjacent buildings were also destroyed, and many workers were injured by flying debris and chemicals.

Laguna Honda School, about ¼ mile from the blast site, had just opened that fall with 38 students. It suffered broken windows and cracked plaster, but fortunately school was out for the Christmas holiday. At the next meeting of the school board after the explosion, the hazards of having a powder works near the school were argued, but ultimately nothing was done. 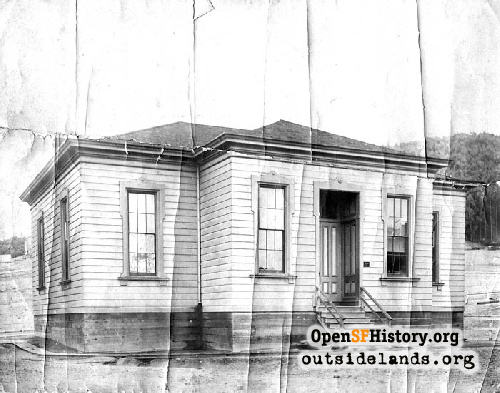 The final explosion at the California Powder Works occurred on June 8, 1877, just before noon as the temperature reached 91 degrees on the hottest day of the year. As the workers left for their lunch break and were 50 yards from the nitroglycerin house, they were knocked to the ground by an explosion. They got up and ran 100 yards before there was a second blast. Witnesses reported seeing “an immense lurid flame of the grandest description shoot into the air followed by a bright cloud of dense yellow smoke.”

The 50-by-16-foot building in which 500 pounds of nitroglycerin was to be made into dynamite no longer existed. The hillock on which the building stood had been transformed into a hollow. Warped and twisted scraps of the iron tanks were found 200 yards away.

The foreman’s house, 150 yards away, had the doors, windows, and the side facing the blast torn off. The explosion “played earthquake” with everything movable in the house.

A shed containing 100 large glass containers of nitric and sulfuric acid was set on fire. The foreman quickly smothered the fire with the handiest fire retardant available: sand.

Residents at the Alms House, ¾ mile away, were shaken to the very marrow of their bones, and every house in the vicinity lost windows.

William White’s White House Saloon, 300 yards from the powder works near Golden Gate Park, was completely wrecked, but the family survived the flying furniture with only slight injuries. Charles Kuhirt’s Park Saloon, next to the White House, was also damaged, and all the Kuhirts were injured by flying glass. The Oak Leaf Saloon at 7th Avenue and H Street (now Lincoln Way) was a complete wreck.

Michael Burke’s house, ½ mile away, had all the windows shattered. In John Connolly’s two-story house, the wallpaper was torn from the walls.

Herman Gertsheim, a butcher, was driving in his wagon with four pigs and two sheep when the blast threw him off the wagon and astride the fence, his pigs and sheep on the far hillside. As his frightened horse ran away, the shaken man made a beeline for the nearest operational emporium of libations. 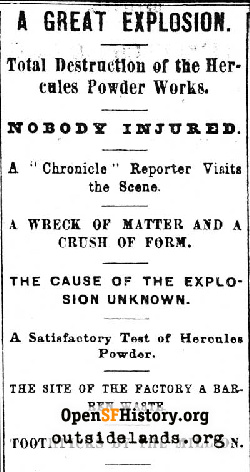 Farther to the west, the Giant Powder Works had enjoyed a much safer record in the nine years since it had moved from its San Jose Road facility after the explosion of 1869. In 1879, 15 buildings covered about 25 acres of fenced land off the Powder House Road near today’s 19th Avenue.

But at 2:00 p.m. on January 15, 1879, the whole city was startled by the sound of an explosion accompanied by clouds of writhing smoke rising in heavy folds above the hills to the west.

The packing house, a 30-by-60-foot building standing approximately at 22nd Avenue between today’s Kirkham and Lawton Streets, had exploded. In the building had been 6,000 pounds of powder and five workers. Not a vestige of the building, contents, or workers remained. Nine other buildings were destroyed.

The shock of the explosion was felt from the Cliff House to the waterfront. Glass was broken as far away as 16th Street on the eastern side of Twin Peaks. A schoolhouse on McAllister Street, more than 2½ miles away, was rocked as if by an earthquake and students were tossed from their desks.

The works should not be allowed near the city nor any settled neighborhood unless at some point near the ocean shore where it is improbable that a settlement will gather about. The location, now occupied, so near Golden Gate Park is entirely unsuited for so hazardous a manufacture.

After four incidents at the California Powder Works killed three workers and involved more than 3,000 pounds of explosives, and two incidents at the separate sites of the Giant Powder Works claimed seven lives and set off more than 6,000 pounds of explosives, the dynamite producers agreed that San Francisco was no longer a suitable place to manufacture their product.

Within a year they had relocated to the East Bay. Giant Powder Works moved to Berkeley and the California Powder Works chose a site a bit north of Berkeley where the city of Hercules became the factory’s company town.

The East Bay powder works continued to blow up into the mid 1950s.