Sometimes referred to as the "North Windmill", the first Golden Gate Park windmill stands 75 feet tall with 102 foot long spars, and was built to pump up to 30,000 gallons an hour of well water for irrigation purposes. (Before the windmill's erection the Park was spending $4,800 a year buying water from the Spring Valley Water Company.)

The Park Commissioners also were mindful of the beauty a large Dutch windmill would add to the west end of Golden Gate Park, and after its creation the structure became a frequent subject for postcards and snapshots.

Like the Murphy windmill built after it, the Dutch windmill's usefulness only lasted a few years. Electric pumps augmented and eventually replaced the windmills in pumping irrigation water. Neglect, storms, and the needs of World War II stripped the windmill of its metal and spars, leaving it a closed-up ruin by the 1950s. 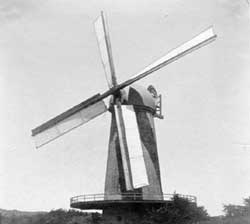 A restoration effort, led by Eleanor Rossi Crabtree, raised the funds and volunteer labor needed to bring the Dutch windmill back to life in the early 1980s. The tower was rebuilt atop the concrete base with new cedar shingles laid on. The spars went back up to spin occasionally, if not to pump water anymore.

The Queen Wilhelmina Tulip Gardens surround the windmill and together they create one of the most picturesque spots in Golden Gate Park today.

The successful restoration now being twenty years ago, the Dutch windmill is again in need of work to keep it from rusting and crumbling away. A new plan is in the works for the whole western edge of Golden Gate Park with money earmarked for both windmills.

Read more on the Dutch Windmill:
Information at Windmillworld!