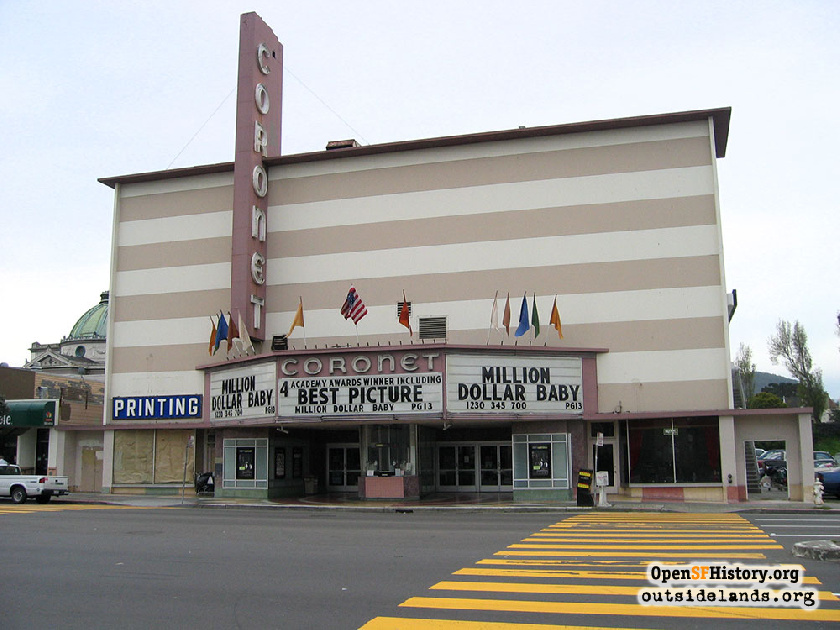 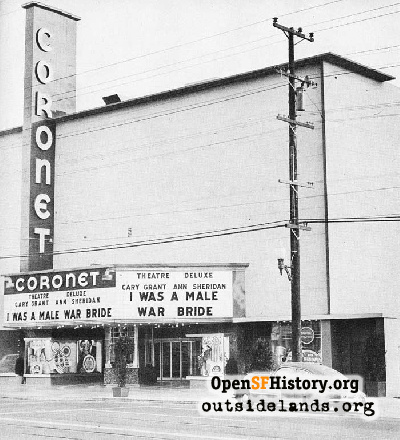 Coronet Theater with its first film showing in late 1949. -

As with most movie theaters, the Coronet opened promising the latest innovations and gimmicks. Its stadium-style seating arrangement had 1,350 loge-type seats (said to provide "a maximum of comfort and vision-ease").

One feature of the Coronet was a nod to the future competition: a six by eight foot television screen in a separate room. Patrons were encouraged to watch at no extra charge.

After giving it a major face lift in 1992, United Artists (UA) admitted in the late 1990s that the theater was in financial trouble. On July 22, 2000, United Artists confirmed the sale of the struggling Coronet Theatre to the Goldman Institute on Aging. The 1,230 seat theater, bought for $8.5 million, was leased back to UA in a series of extensions while construction plans were finalized for an elder-care center. Erected on the edge of the old Odd Fellows Cemetery, the theater was close to the grave itself for five years.

Rumors that the Coronet would hold on for the new Star Wars movie in May 2005 (George Lucas has always loved the theatre) didn't pan out, and the closing day was announced on February 4, 2005. 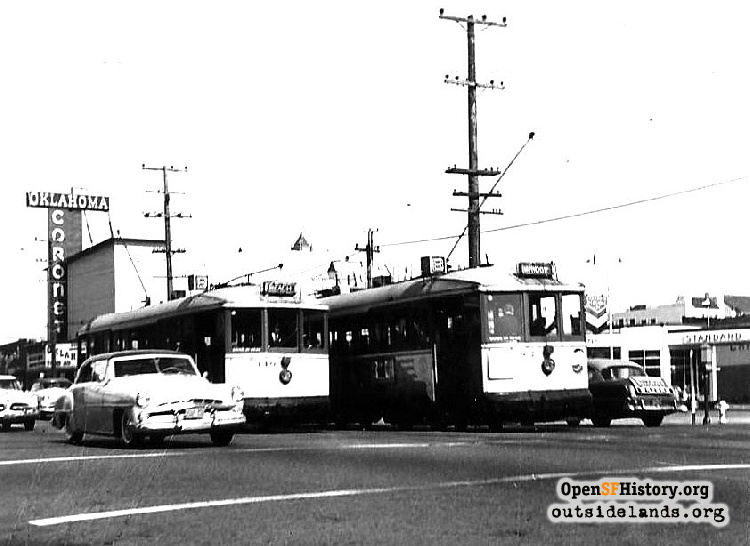 The end of an era and the beginning of another. The B-Line streetcars went out of service in December of 1956, and Oklahoma! starts a two-year run., Dec 1956 -

"After 55 years, a lot of the Coronet's early history has been fogged, so let's set the record straight:

"The Coronet was originally to be called the Ritz, and an announcement promising its construction, along with a painting of what it would look like, could be seen on the site years in advance.

"It opened on 2 November 1949 with Cary Grant and Ann Sheridan in I Was a Male War Bride. This was a second run film, which had previously been shown at the Fox Theatre on Market Street; in those days all first run films opened downtown first, and it was to be the Coronet's policy to operate as a second run house for the next six years.

"The Coronet was operated by San Francisco Theatres Inc. which also ran the Alexandria, Coliseum, Metro, Balboa, Harding, and Vogue. The Alexandria was their flagship house, and got the pick of the pictures, even after the Coronet opened. The Alexandria went for prestige appeal, while the Coronet played to the action and adventure crowd. You might see An American in Paris or Singin' in the Rain at the Alexandria, while the Coronet would offer D.O.A., Comanche Territory, It Came from Outer Space (in 3D), or The Beast from Twenty Thousand Fathoms. This policy was actually a moveover from the Coliseum which had played this kind of product prior to the opening of the Coronet, and which was now relegated to re-runs, revivals, and odds and ends, and eventually closed circa 1952.

"The Coronet's life as we know it today, and have known it for almost fifty years, began on 1 February 1956, with the exclusive (meaning it was shown at no other theatre in the San Francisco Bay Area), first run, roadshow (meaning all seats were reserved and could be purchased in advance) engagement of Oklahoma! in 70mm Todd-AO and Stereophonic Sound. Oklahoma! ran an incredible 44 weeks, to be immediately followed by Around the World in 80 Days, which more than doubled Oklahoma!'s record and ran an astounding 96 weeks (the San Francisco long-run record). While all this was going on, the Coliseum re-opened and picked up where it had left off four years earlier with the action and adventure films which had been playing at the Coronet. 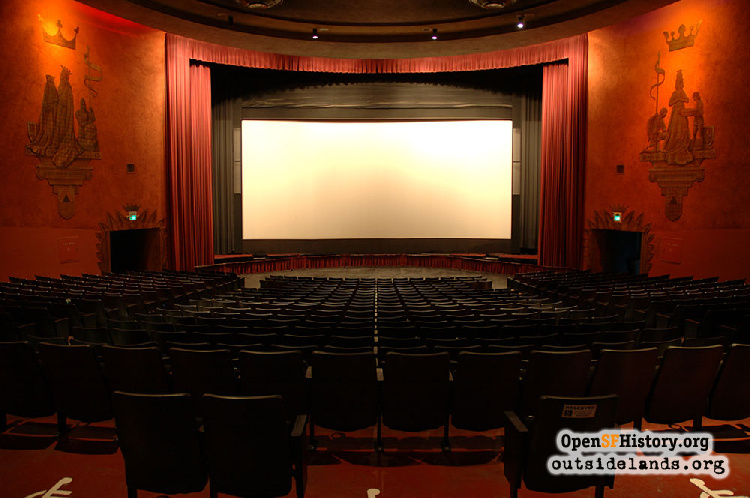 Interior and screen of the Coronet Theatre after closing., Mar 17, 2005 - Photo by Anderson Gin of the Phaeton Group

"Footnote: the former television lounge, which was located to the right of the lobby as you went in, was converted into an advanced sales ticket office for Oklahoma! 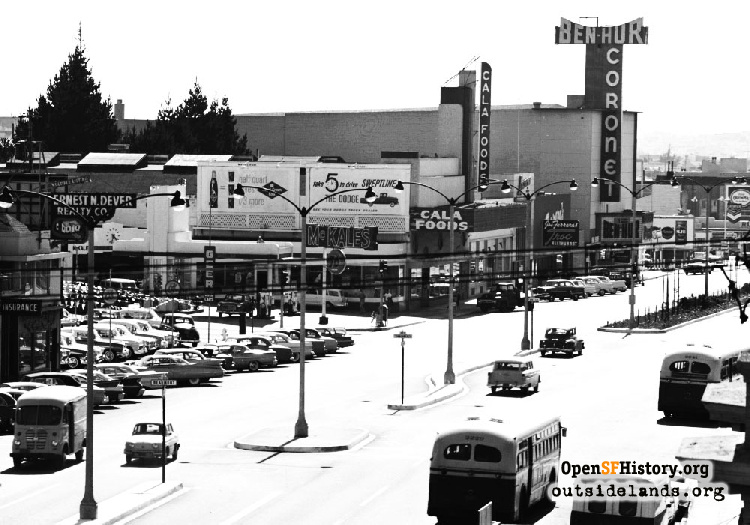 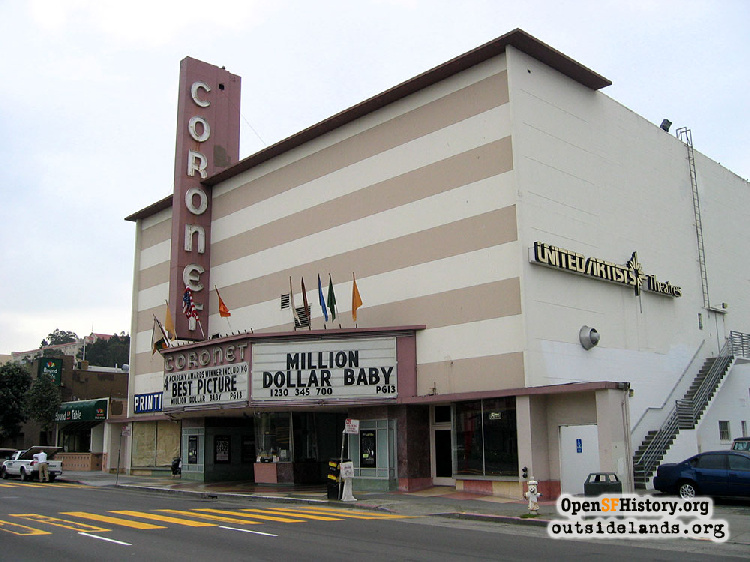 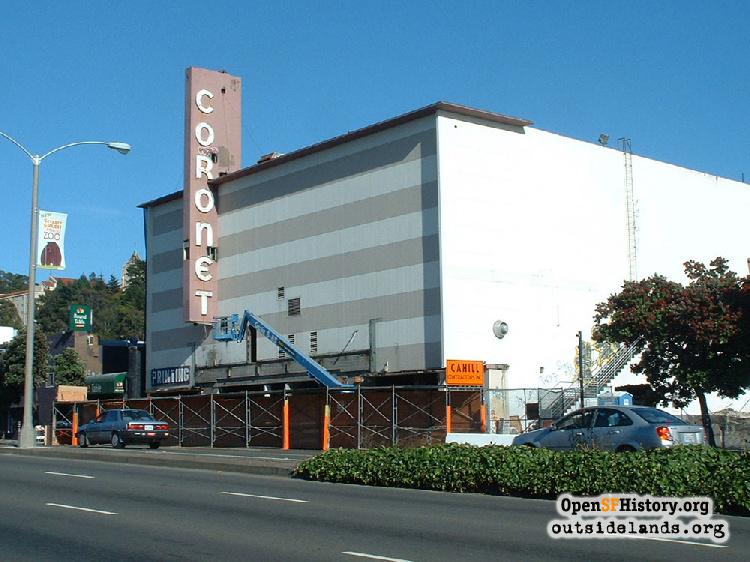