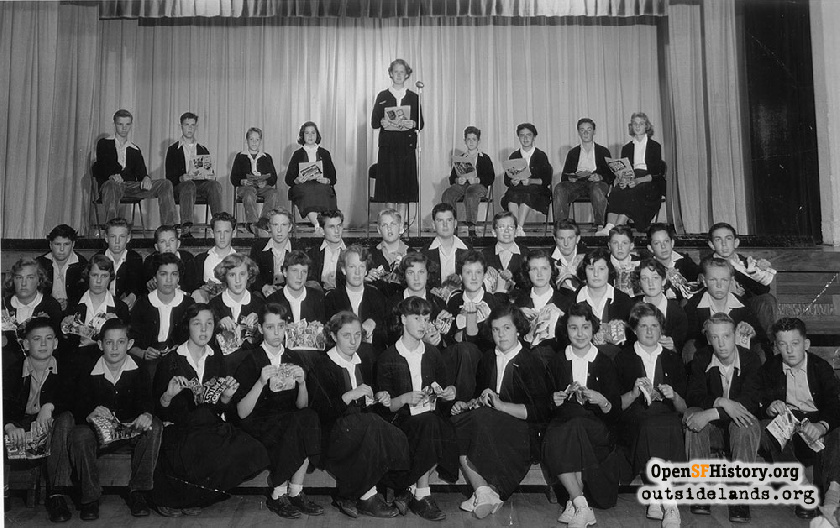 The comics crusade was a nationwide movement driven by churches, the PTA, and the comic book industry. 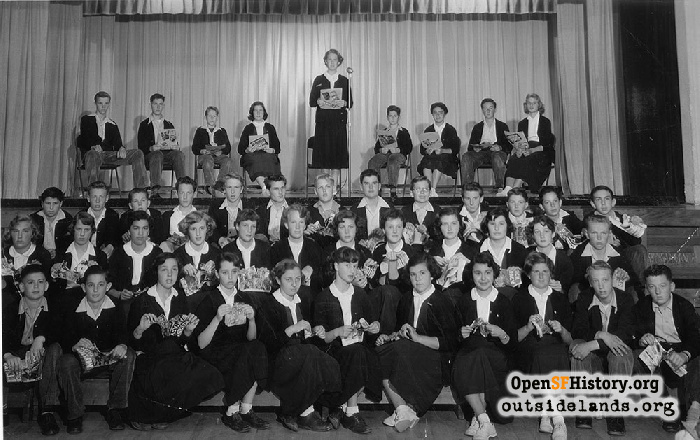 Star of the Sea students pose ripping comic books in the school auditorium in 1954. -

This photograph shows the seventh grade class at Star of the Sea Grammar School engaged in a campaign to condemn the evils of comic books. In the spring of 1954, our class gathered comics, speakers prepared talks about their evils, and an assembly was held for the upper grades of the school. The keynote speaker was Elizabeth Cahill (center), the daughter of Police Chief Thomas Cahill. The students in the bleachers are seen tearing up the evil comics, which today are prized collectibles!

The comics crusade was a nationwide movement driven by churches, the PTA, and the comic book industry. Marvel Comics and DC Comics were worried about EC Comics taking over market share with its horror line that included titles like Crypt of Terror, Haunt of Fear, Tales from the Crypt, Vault of Horror and Weird Fantasy. A second successful EC line during the Korean War was its combat series with titles like Frontline Combat and Two-Fisted Tales. (Although EC was the first producer of Mad, that was not the object of our purge in '54.

The success of the EC horror comics led its rivals, DC and Marvel, to look for ways to cut EC market share. They proposed the Comics Code, limiting vampires, werewolves and other underworld creatures, as well as minimizing the glory of killing in combat. In 1954, Congress was threatening to pass some kind of anti-comics legislation, so the industry got the PTAs and churches to fight their fight. (This was the era of Joseph McCarthy and his anticommunism crusade. Our education had been peppered with questions of what we would do if the classroom door swung open and a commie with a gun asked us to choose between God or Communism.) We students at Star of the Sea were witnessing for morality, having no idea of the larger commercial implications of the crusade.

Little did we realize that we were limiting the stock of certain comics and raising their value to future collectors. 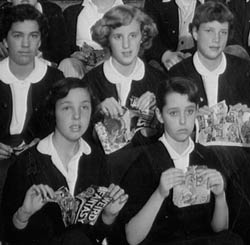