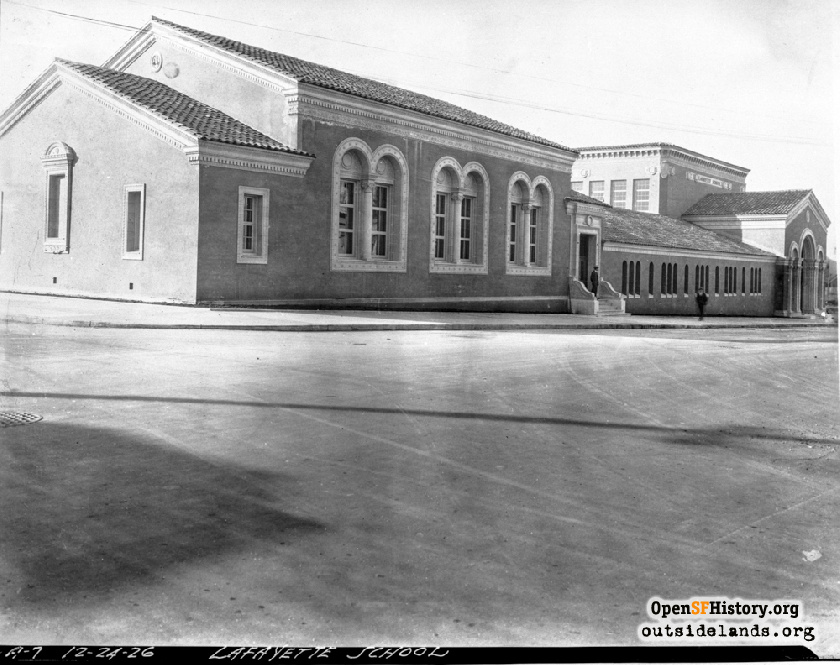 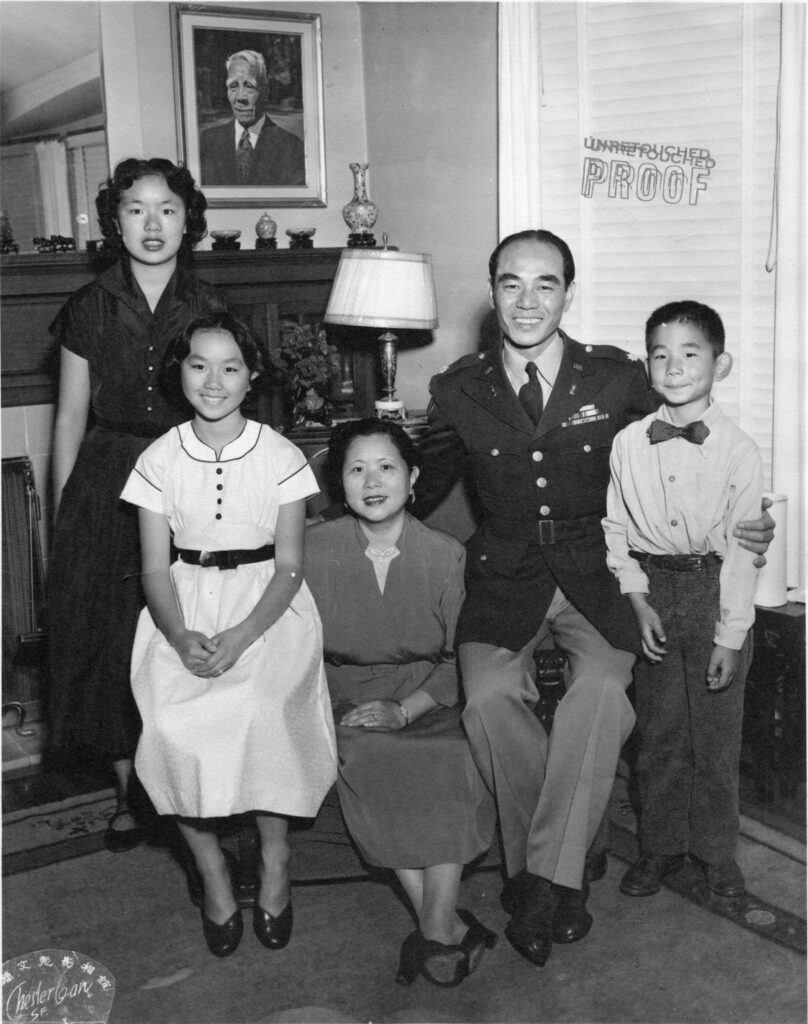 Left to right: Janey Young Cheu, Connie Young Yu, Mary Lee Yount, Lt. Col. John C. Young, Alfred John Young at the Young family at 674 37th Avenue, circa 1952. (Courtesy of Al Young)
“And we didn’t just move there,” Al continued. “We had the feeling that we needed to assert ourselves and we’re going into this neighborhood to live as Americans. I’m not sure how other people of color felt about moving into (at the time) an all white neighborhood, but we certainly felt that we had every right to be there as third- and fourth-generation Americans, and an Army family. We were accepted into the neighborhood eventually. To the realtors we weren’t, but all of their fears came true and we got into the neighborhood and acted like people. We started buying and inviting our friends, and we took over the neighborhood.”
‘Horrible, horrible! Ruined your white neighborhood,’ they said. But if you hadn’t sold your house, you’d be a millionaire now. Same fear, if you let Blacks into the neighborhood your property values will diminish. The Richmond is a great example of suburbia when you let non-Whites in! It becomes really interesting! I look at the kids I grew up with, those who were White, and I look at them on Facebook. And almost to a “T” they’ve got Asians, Hispanics, and Blacks in their immediate families. See what public school did: it ruined us!”
“There were no Chinese in the Richmond District to speak of at the time,” he said. “Those that lived in the Richmond were mostly wealthy enough to buy a home. Although, down the block from my home, which was so weird, was a Chinese orphanage. And I never saw the orphans! I lived there for 16 years and I never saw an orphan there. I saw the structure and we would always walk by there and everybody knew it was the orphanage, but nobody ever saw them. I walked by it and my friends used to say that that was the orphanage.”
Nobody ever saw orphans at 740 37th Avenue because the white neighborhood feared an influx of “Oriental children.” A proper garden and fences were proposed to shield the sight of Chinese babies from white residents. Founded in 1933 by Donaldina Cameron, Dr. Bessie Yeen Jeong, Helen Wu, and a group of Chinese Presbyterian women, it was called Mei Lun Yuen. In 1939, it transformed into a foster home managed by Helen Wu. Despite fund-raising activities in the 1950's, by 1962 Mei Lun Yuen was defunct, the abandoned property was sold by the City, and a new building was constructed on the site.7
“But, in general, it was a middle-class neighborhood. Almost everyone was employed, working-class or professional, and had similar backgrounds. Most of the parents were in the war—a lot of shared experiences. The neighborhood was great. I lived half a block away from the Balboa Theater. Growing up there, the biggest thing was birthday parties. Everybody had to have birthday parties, and they were almost identical. We’d have hot dogs and ice cream and go to the Balboa Theater for a matinee. It was like every birthday party was like that!” 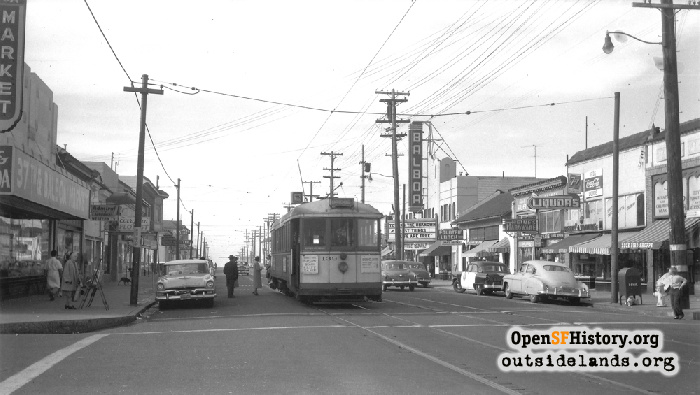 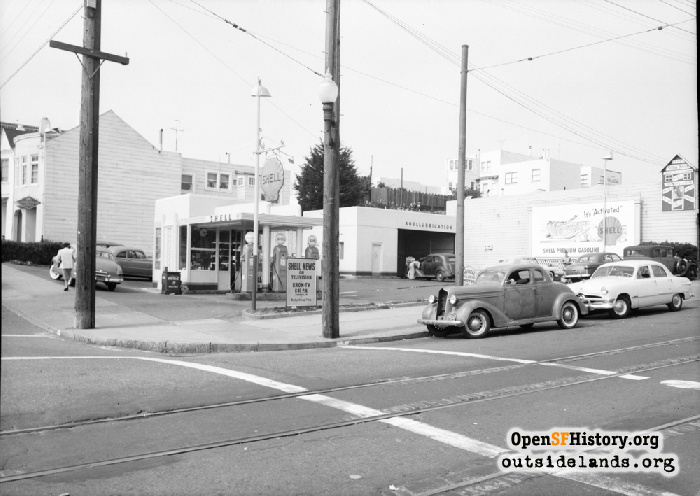 Shell Station on the northeast corner of 37th Avenue and Balboa, 1951. (wnp58.201; SF Assessors Office Negatives / WNP Collection)
“And then the other Chinese business was a Super Market. Ours was a strange neighborhood; on 37th Avenue, where we lived, if you went three more doors down there was a gas station. It was a Shell station on the corner. Next to the Shell station was Cala Foods and right across the street from that was another supermarket, and then right on the corner of 37th and Balboa there was another—three supermarkets within 150 feet. Kitty-corner from the Shell station was where Chinese ownership of a supermarket appeared. I can’t remember his name but he ended up buying the store. 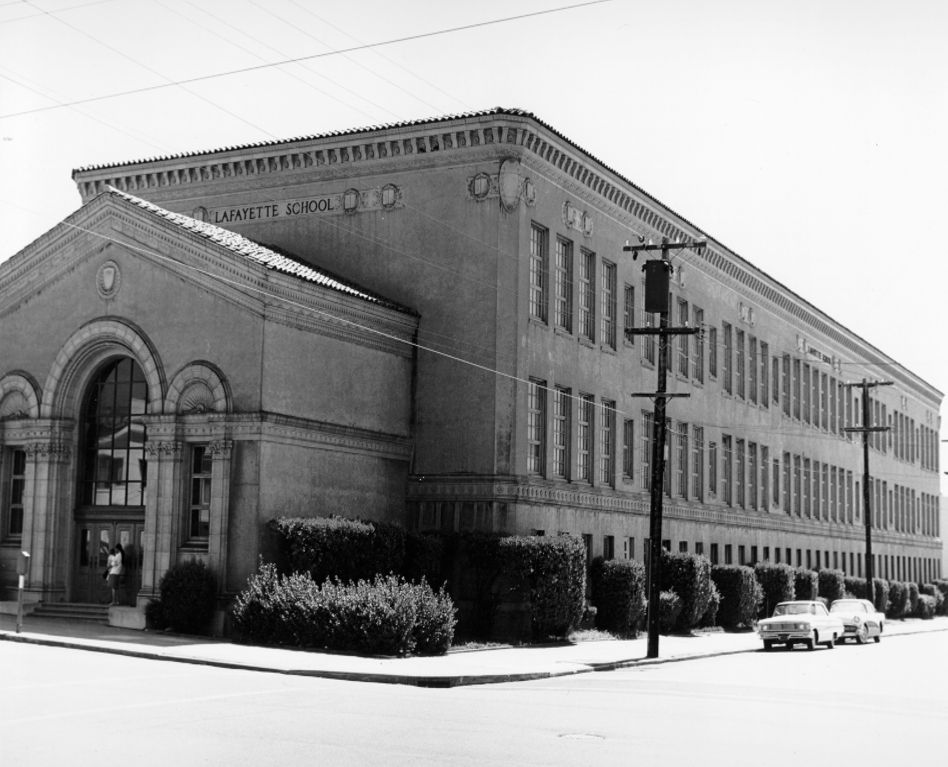 Lafayette School at 37th Avenue and Anza Street, August 1964. (Courtesy of the History Center, San Francisco Public Library / AAA-9901)
“We lived four houses down from Lafayette School, so I was able to go to the playground there all the time. On my particular block, the school took up the other side so there weren’t too many kids. They were either younger or older than I was. But, I would walk two blocks away and all of my best friends would be there. It was a very idyllic childhood and I felt very privileged. I did everything I wanted to do and I never felt any kind of prejudice. If someone said something off-color, most people would say, ‘What are you, crazy?’ Or I would have to punch them in the nose and then it was all settled. But, that was it. All of my friends, we just grew up together, we were all kids.” 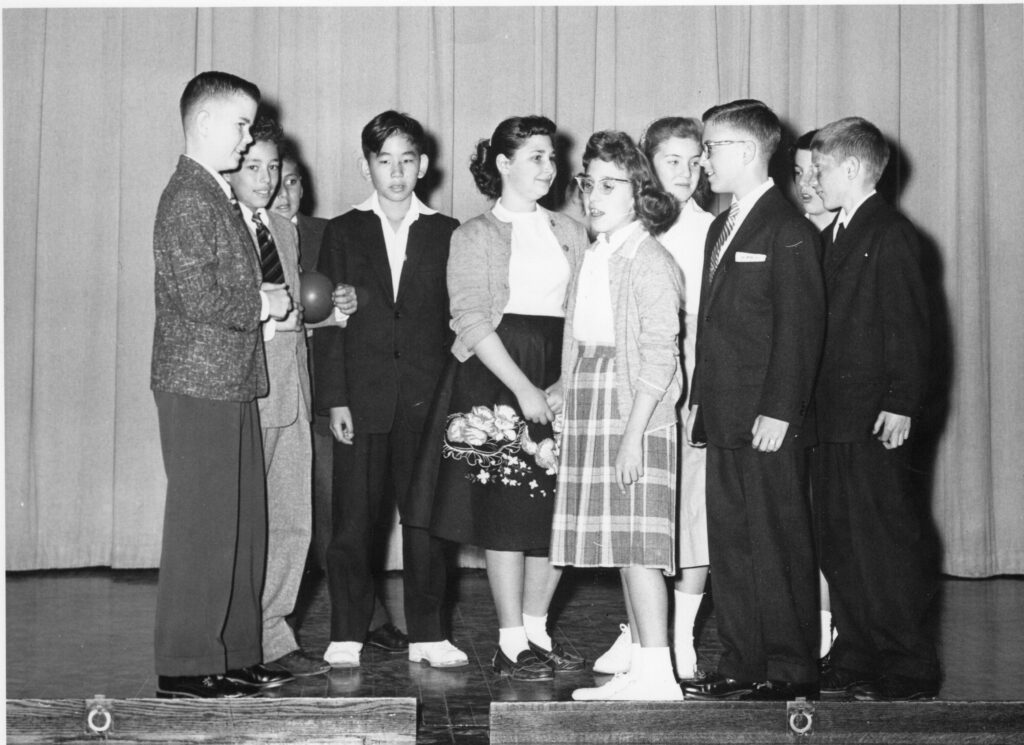 (Courtesy of Al Young)
In January 1957, he did receive an honorary mention for submitting a story, poem, or drawing to the San Francisco Examiner’s “Juniorama Playland” section. 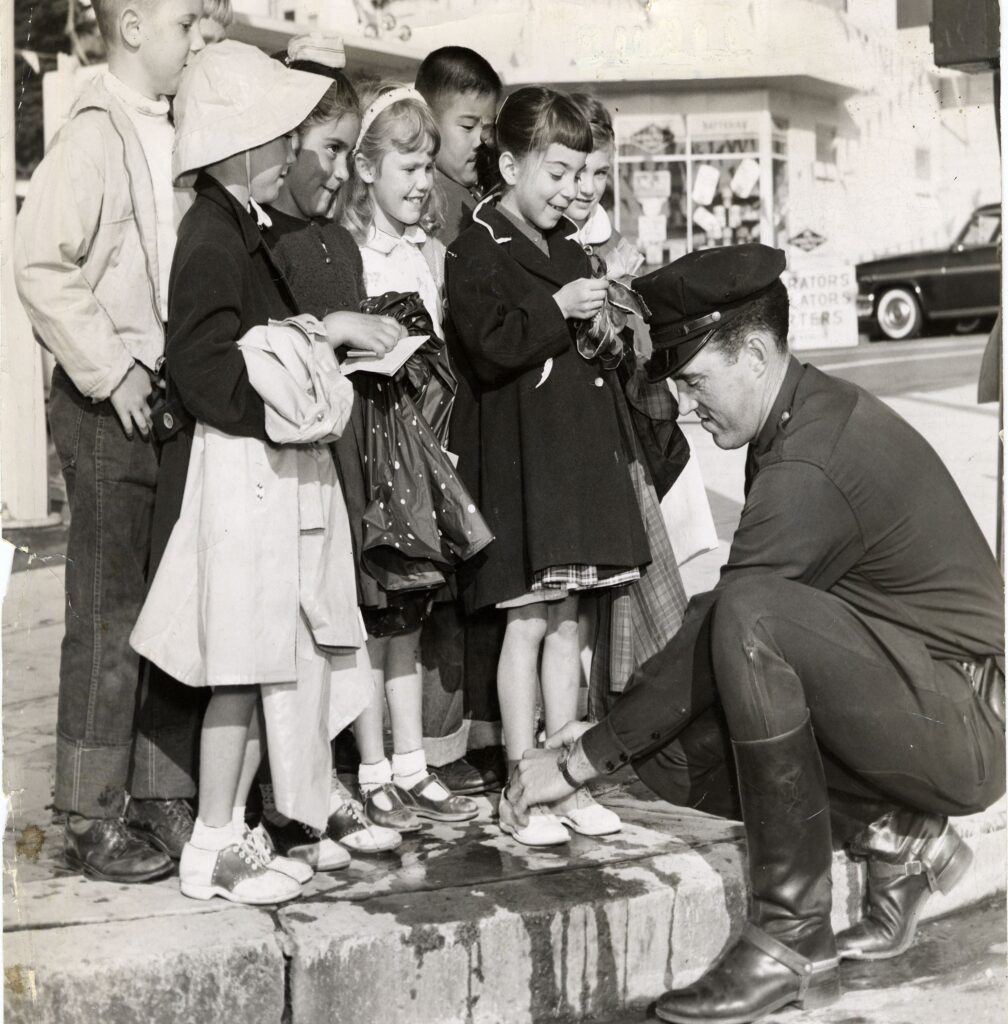 Mounted Policeman Charles Conran ties Patricia Scaglione’s shoelaces at 37th Avenue and Balboa as a group of Lafayette Grammar School students wait to cross the street, November 12, 1957. (Courtesy of the History Center, San Francisco Public Library / AAH-0370)
“The things that I remember the most were the May Festivals at the Lafayette School. The May Festivals were so cool. We would dance around the flag poles and did all these fertility rites that we didn’t know were fertility rites. We could not even pronounce the names of the dances that we did. It was all from Scandinavian or Baltic countries, but we loved them! We sang and danced, and it was very ethnic. The biggest thing that I felt and remembered about grammar school was that the teachers worked really hard at making sure that every one of us felt that they were their favorite student. I remember Miss Bett, who was our kindergarten teacher; she was also my sister’s kindergarten teacher. My sisters went to Lafayette before I went to Lafayette. When I entered in, I felt very much at home.” 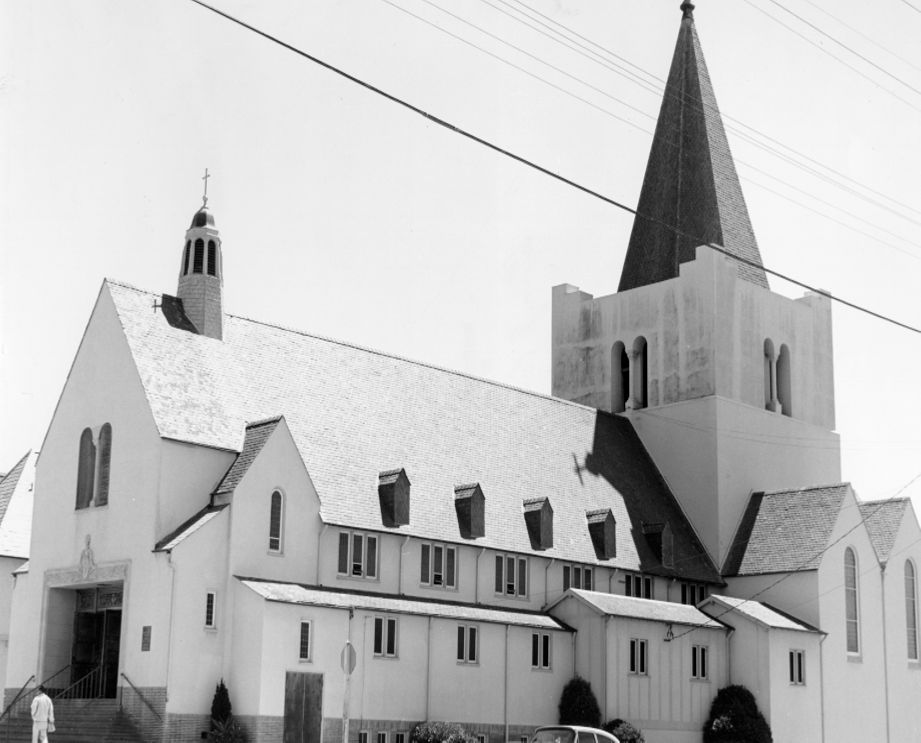 St. Thomas Catholic Church on Balboa between 39th and 40th, 1964. (Courtesy of the History Center, San Francisco Public Library / AAB-1053)
“When we moved to the neighborhood I always went to St. Thomas Catholic Church on 39th Avenue and Balboa. I stopped going to church when I went to college, but I gave it a real run. I was confirmed, First Communion and everything else. My mother was baptized Catholic. But every time, I’d always have to pray for her because she never went to church with me. I always thought, ‘Oh my God, she’s going to go to Hell!’ We were public school kids and we were let out for two weeks during the time of our confirmation. We had to take confirmation classes at St. Thomas so I was a student there for two weeks even though we were enrolled at Lafayette Grammar School. It was organized between the public schools and the Catholic schools. It was a fun time!” 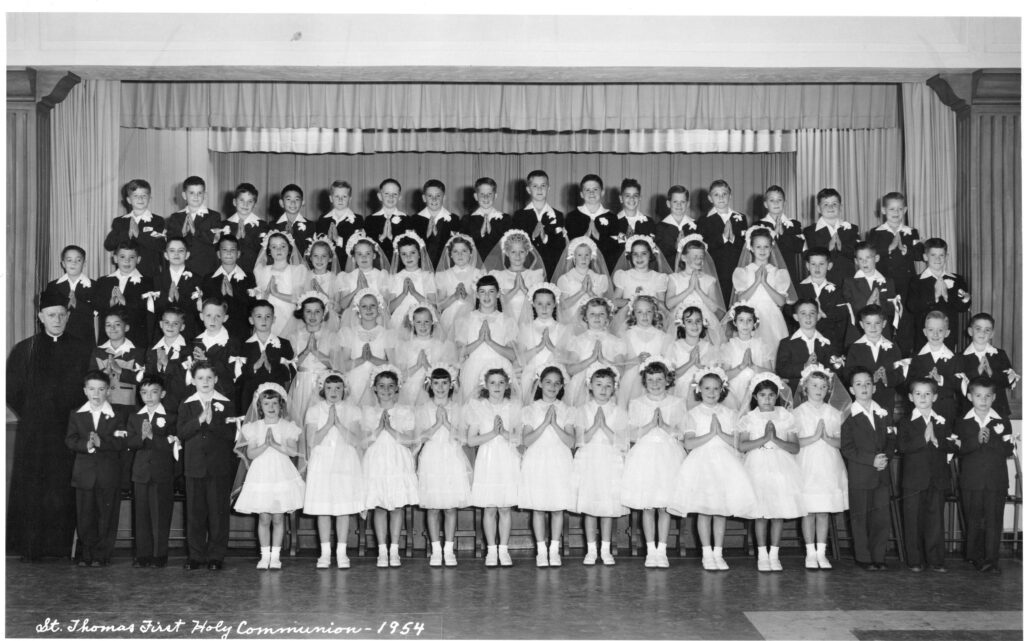 St. Thomas First Holy Communion, 1954. (Courtesy of Al Young)
“In elementary school, you’re in a self-contained classroom and the teachers really tailored most of their lessons for you. You really couldn’t fail. I never knew I had a learning disability going through elementary school. In fact, they sent me to a school for gifted kids in 1958. Sputnik was launched and it just sent chills up and down everyone in America. ‘Oh, the Russians are going to get into outer space before we will, and they’ll own outer space, and we got to do something!’ School officials went around to all of the elementary schools, high schools, and junior high schools and asked for all of the kids that may show an aptitude towards science. I built a lot of things and I love to work with my hands—radios and with directions, not that I invented them. My teachers felt that I was a gifted kid so they sent me to Lux Lab, myself and another student. Two students from every school in San Francisco went to Lux Lab. And we were treated like gifted kids. And there were kids that were truly gifted; I was not one of them, I just liked to build things. They set us in front of a table and gave us whatever we wanted; we could build whatever we wanted and do anything we wanted.”
“Here I was with a background of being a gifted kid, going to a gifted school, going to Presidio Junior High School where everything that you read was in a textbook and you had seven periods a day. And I couldn’t read. I have ADHD, which is another story. I didn’t know I did until I was 50 years old. I can read, but by the time I got to the end of the sentence, I forgot how the sentence started. So reading was futile to me in my early years. Everything in junior high was out of a textbook and I was helpless. I started in the top group and I matriculated slowly downward. By the time I hit ninth grade, I matriculated to the bottom group of students.” 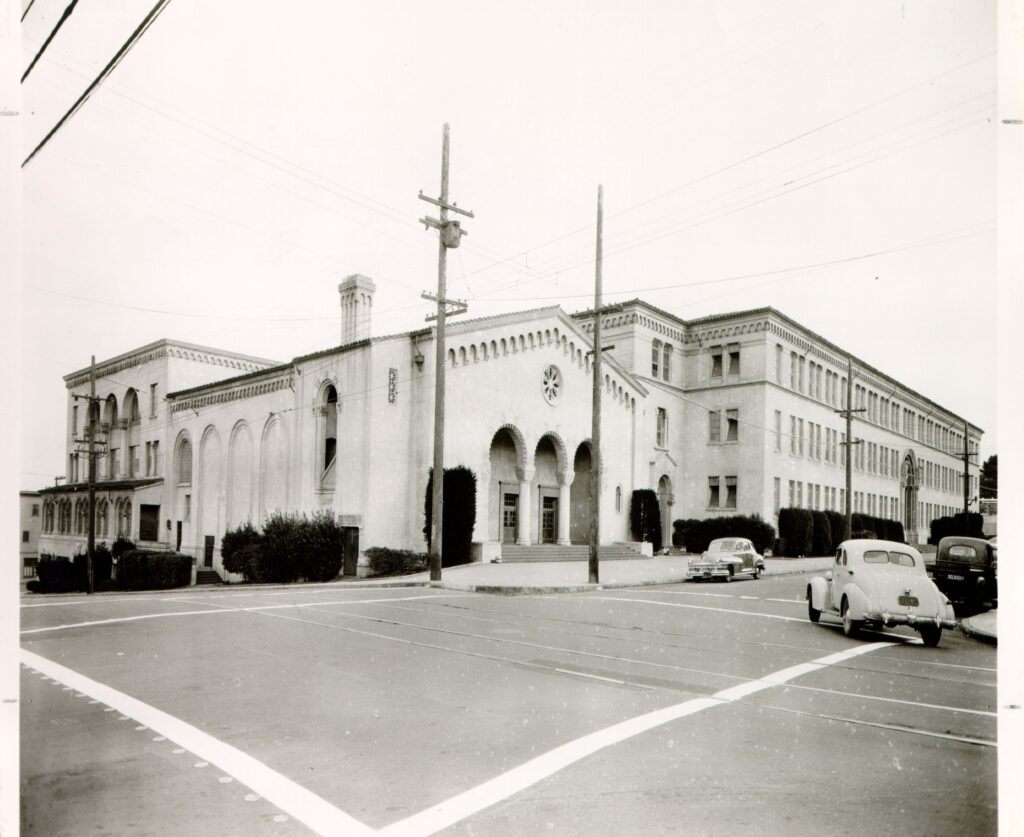