Terrorism in the Richmond District in 1927

Exploding luggage on Balboa Street and the "black hand." 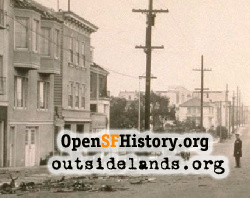 Terrorism in the Richmond District in 1927

WNP member Paul Rosenberg did some research on a 1927 explosion on Balboa Street near 15th Avenue.

"Jesse Brown Cook began as a San Francisco police officer and worked his way up to police chief (1908-1910) and, later, served on the police commission. His collection of photographs from 1895 to 1936 at the UC Berkeley Bancroft Library runs to about 8,000 images and about half are digitized and available online. I found this example of 'terrorism' in the Richmond District around the time of the Sacco-Vanzetti executions on August 22, 1927.

"Although the photos are great, Mr. Cook was not the best caption person. His captions contain misspellings and other errors. He places the incident on August 30, 1927, but it actually took place around midnight July 30-31, 1927. He also got the name of the person killed in the explosion wrong. Such errors make follow-up in the newspapers of the time and the death records most challenging." 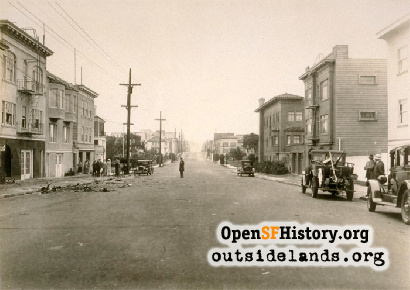 "East on Balboa St. from 15th Ave. [ July 31, 1927] "...parts of the auto after the valise explosion loaded with Nitro-Glycerin killing Dominick Crawford [sic.] and sending Angelo Luca to the hospital. They are members of the Italian Black Hand.", 1927 - Jesse B. Cook Collection, UC Berkeley

Transcriptions of newspaper articles about the incident:

One man was instantly killed and another was so horribly mangled that he may die in a terrific explosion---perhaps caused by a bomb---in an automobile on Balboa street, between Fourteenth and Fifteenth avenues, just before midnight last night.

The blast---no one yet knows what caused it---rocked the entire neighborhood, and all the windows in the houses on that block were blown out.

The occupants of the car were not positively identified at an early hour this morning, but from insurance blanks found around the car it was thought that one of the men might be Angelo C. Luca, an insurance man, who lives at 1865 Green street and who drove a car similar to the one destroyed by the explosion.

Clothes Blown Off
Both men were found outside the car by people of the neighborhood who rushed to the scene of the explosion. They were terribly burned and mangled, and the clothes had been blown from their bodies. Wires overhead had fragments of garments hanging to them and the car itself, from the dashboard back, was utterly demolished.

There were no witnesses to the explosion that the police could find last night. The first intimation of the tragedy was the deafening explosion, which was heard for a distance of fully a mile.

Police rushed to the scene and after a first investigation declared that the blast was probably the result of dynamite, which, they said, must have been in the car.

Body Blown 30 Feet
One body was found beside the car, which may have been running at the time of the blast, or may have been parked on Balboa street. It was about two feet from the curb and heading in the proper direction.

The other body was about 30 feet behind the machine, lying in the road.

The man who was still living was taken to the Park Emergency Hospital, where it was found that both of his legs were broken and he was badly burned. There was scarcely any clothing on his body, and nothing to identify him.

SUICIDE, NEW BOMB THEORY
A death plot against Captain of Detectives Duncan Matheson [later San Francisco Treasurer] was responsible for the bomb explosion on the night of July 30, according to information given the police last night. Dominick Caffodio was instantly killed when the bomb exploded and Angelo C. Lucca, 1865 Green street, with Caffodio, in an automobile, was seriously injured. The blast occurred at Fifteenth avenue and Balboa street.

According to the story given the police by a war veteran and native of San Francisco. Caffodio was a member of an anarchist group, but was trying to escape the terrorists. He was selected by lottery to hurl the bomb, the police were told, but deliberately touched it off prematurely and ended his own life.

The story told by the police informant came to him, he said, through his wife who, in turn, obtained the information from an Italian girl claiming to be Caffodio's cousin. The story is being investigated by the police.