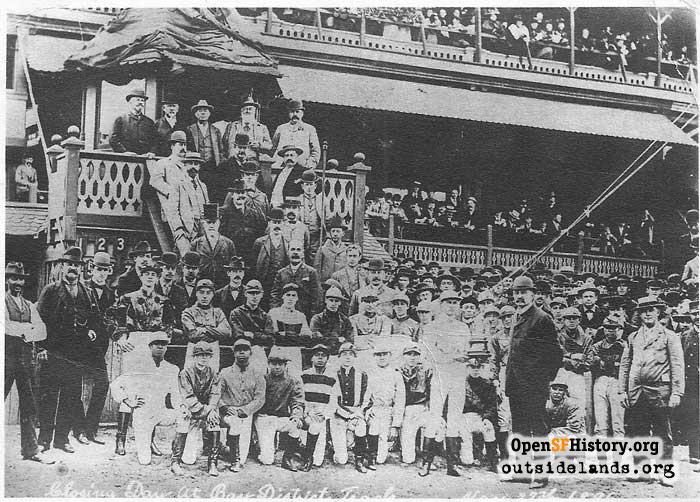 Third in a series on west side racetracks.

This article is one of a series on the history of west San Francisco racetracks. 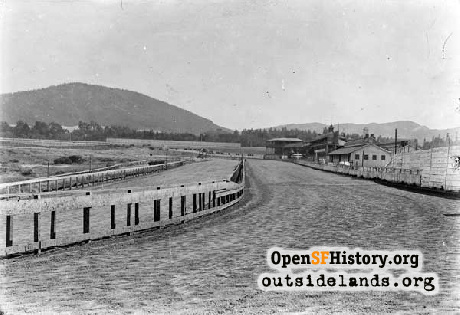 The quarter stretch of the Bay District Racing Track. Mount Sutro in the distance., circa 1893 - California State Library

The Bay District Racing Track formally opened on September 7, 1874, but its grand inaugural event came on November 14, 1874, when the second "Great Race," this time with a $25,000 purse, was run. This was the largest purse ever offered in America. The entrants included Thaddeus Stevens and Joe Daniels, who had raced the year before at the Ocean Course. Also entered were Katie Pease, Alpha, Hockhocking, Hardwood, and Henry.

Sentiment and loyalty favored the current champion and native son, "Old Thad," but on race day the odds-makers gave Katie Pease, the Eastern mare, the nod. Nonetheless, the cheering for Old Thad was loud and prolonged when he was in the lead or in contention, but this lasted only through three miles of the first four-mile heat. Despite the hopes that Thad would repeat his soul-stirring victory of the year before, Katie Pease was the winner.

During its first years, with a few notable exceptions, all that the track offered were harness races. By the end of 1877 the Bay District was in noticeable decline. There were several factors, one of which was the surrounding hills which frequently had more spectators than were inside the track. Another problem was difficult access. It took longer to reach the Richmond District course than the new Oakland track, a short ferry boat ride from downtown San Francisco. 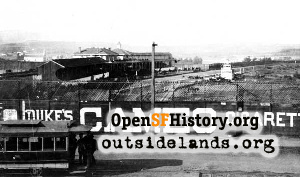 But the main reason for the decline of the Bay District Track was poor early financial planning. When the track was conceived and built, it was envisioned as being as lavish as the grandest eastern tracks. Because of the silver boom, the members represented more wealth than any other race track in America. The initial 10-year memberships produced a lot of up-front money and created a lavish facility, but lack of annual dues precluded necessary annual improvements and basic maintenance.

The subsequent crash of the silver market choked off additional members. When the start-up money ran out, the cash-flow ended, and for three years there was no racing at the track. Also, during this time, the city had caught up with the sand dunes of the Outside Lands, and the track found itself surrounded by development, setting the stage for years of confrontation between the track and its encroaching neighbors. 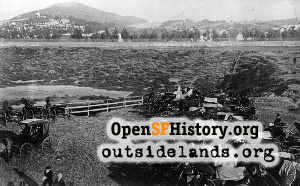 Harness racers awaiting their turn at the Bay District Racing Track in the Richmond District. Cemeteries below Lone Mountain in the distance. -

By 1890 it seemed that the track's epitaph was written, but Thomas Williams, a dynamic 30-year old, assumed control of the Bay District and brought the dead back to life. He changed its direction by emphasizing thoroughbred racing. These horses were the runners, the racers, the epitome of horseflesh that gave their all over single races between a half mile and 1 mile. This was the end of trotting and pacing; this was the future of racing in San Francisco.

As action heated up inside the track, passions were intensifying on the other side of the fence. On June 18, 1891 the Board of Supervisors considered a petition from the Point Lobos Improvement Society demanding the removal of the fence around the track and to fill in the ground. In October 1892 the Richmond Improvement Club appeared before the Board of Supervisors to protest the existence of the race course and demand the opening of the streets which had been closed to allow the track's operation.

No action was taken against the track on these matters, and in 1893, for the first time in San Francisco racing history, horsemen from the east brought their racing stables to San Francisco for the winter season. Something never offered in San Francisco was about to happen this year: continuous thoroughbred racing. Not a few days or a few weeks, but five days a week for month after month. Previously, races had been held for a week or two every several months.

The extended season was a success, but it was not universally appreciated. The residents of the Richmond District once again expressed their objection to the continued existence of the race track and renewed their efforts to have the closed streets opened and the open track closed. They were especially opposed to the saloons on Fulton Street and on 5th Avenue facing the track, an area infamously known as Beer Town.

However, the following week the Richmond Banner leapt to the track's defense. In response to the Banner's support of the track, "a voluminously signed petition" was presented to the Board of Supervisors by the residents of the Richmond District in favor of keeping the streets closed and the track open.

On July 30, 1895 the San Francisco Call headed an article "THE OLD TRACK DOOMED. Racehorse Men Look With Longing to the Opening of the Ingleside Course."

This was not the first mention of the Ingleside Race Track. More than a year earlier the city's newspapers reported that Ed Corrigan and others had purchased 110 acres of land in the Ingleside District from Adolph Sutro for $165,000.

With pressure from too many sources, Tom Williams was unable to continue operating the track. On May 27, 1896 the Bay District Track closed in a sentimentally nostalgic affair unprecedented in San Francisco race course history. 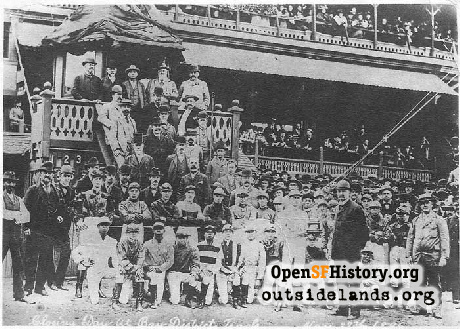