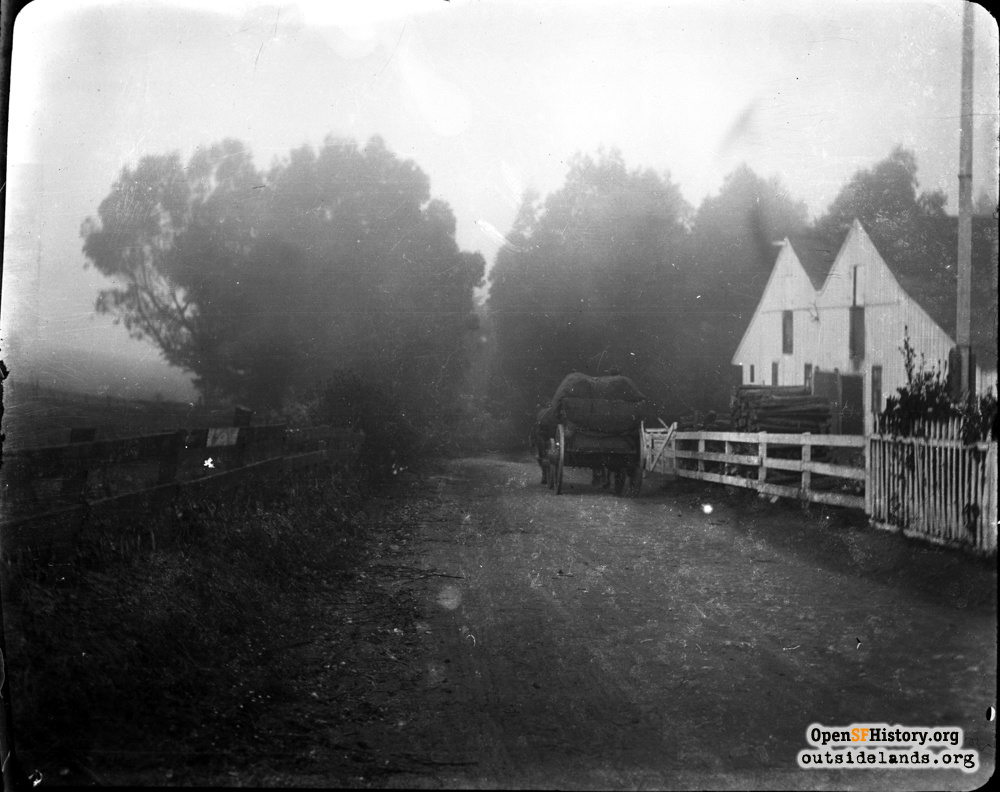 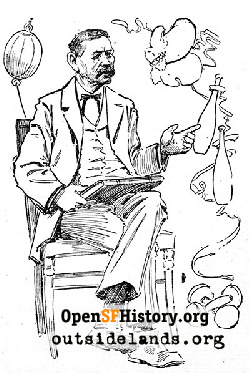 In 1896, the San Francisco Call described Bernard Farley, a pioneer of the Ingleside District’s old Ocean Road (today’s Ocean Avenue), as a “character of renown.”

I will admit to having a personal weakness for characters. My family history has its share of black sheep, whose actions may have been questionable, even reprehensible. The smoothing hand of time, however, has made petty thieves, town drunks, and bankrupt miners welcome eccentrics in my otherwise staid family tree. Tragedies of alcoholism, gambling addiction, and mental illness, far removed from one’s immediate exposure, do make for interesting reading.

“Barney” Farley, however, was no dissolute, and his possible dealings on the wrong side of the law were never considered serious offenses. In fact, Farley had a hand in true civic improvements to the developing Ingleside neighborhood in his sixty years of living in the foggy outreaches of the city. But he was a character.

Farley was born in 1840 in Westmeath County, Ireland, and immigrated to the United States about ten years later. As a young man in Woonsocket, Rhode Island, he became a liquor wholesaler and eventual owner of a horse racing track and a string of equines to race on it. He was also a well-known local athlete, able to run almost as fast as some of his horses, whip anyone in handball, and take on the best as a bare-knuckled boxer.

After coming to California in the mid 1860s, Farley bought land to farm and ranch near the present day intersection of Junipero Serra Boulevard and Ocean Avenue. On the northwest corner of the crossroads, he opened “Farley’s Resort,” a roadhouse and wayside for sporting men on their way to and from the Ocean Course Racetrack. The racetrack opened in 1865, close to where the present Lowell High School sits today, and may have been what brought Farley west in the first place. Liquor, racing, and boxing were his business, and a good deal of the resort was dedicated to training facilities for boxers. 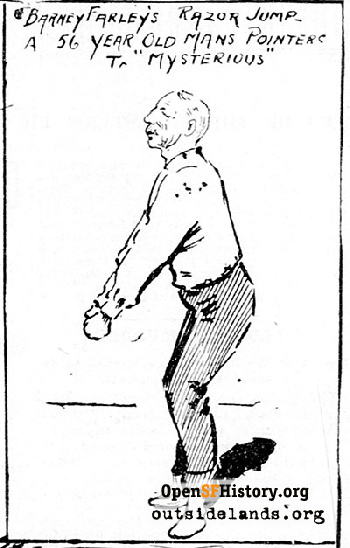 Barney Farley about to do his jumping-the-razors trick. - San Francisco Call

Farley was short, blue-eyed, and often called “professor” for his scientific fighting and athletic training knowledge. Many considered him a physical marvel. At fifty-six years of age he could hold each end of a cane and jump over it without releasing his hold with either hand. When he wanted to impress the young bucks in his gym he’d do the same feat holding two open straight razors. Farley smoked thirty cigars a day, a habit so well known by bumming friends and acquaintances that he carried dozens with him every day to satisfy the moochers.

He and his wife Mary had at least six children, and they often had boarders, including schoolteachers assigned to the remote Ocean Road School (predecessor to today’s Commodore Sloat Elementary School), across the road from the Farleys. Mary couldn’t read or write, but her husband knew enough to make book for a fight or a race at the track.

Boxing matches, and betting on boxing, were extremely popular in San Francisco, which was known nationally as a “fight town.” Getting permits to stage various kinds of matches and scheduling fight locations was often a headache in San Francisco, so Farley wasn’t the only one with a training facility in an outlying area. Many trainers and promoters operated gyms at roadhouses near the San Mateo County line for convenient access to legal (or at least ignored) fights in Daly City and Colma.

In addition to having a drink or watching boxers work out (these were the days when swinging wooden Indian clubs was a common exercise), a visitor to a place like Farley’s resort could play a game of cards, shuffleboard, or even bowling—with options to wager on the outcomes. Usually law enforcement turned a blind eye, although there were exceptions.

In 1875, Farley tried to host a dogfight. The betting pool was up to $600 and 300 “sports” had shown up. The poor canines were given a reprieve when tipped-off undercover police officers were sniffed in the crowd and the whole mass scattered.

Farley trained or was on good terms with many of the top boxers of the era. In his facilities he often emphasized a point with a blackthorn stick given to him by Jack Dempsey. (Not the champion from the 1920s, but an Irish-born boxer known as “Nonpareil Dempsey.”) In a corner of the gym was a screeching parrot on loan to Farley from boxing hall-of-famer Jack McAuliffe. The professor wasn’t very fond of hometown hero “Gentleman Jim” Corbett, likely because he had knocked out his own pupil, Joe Choynski, in a 27-round brawl in 1889. (Boxing was a particularly brutal sport in those days, in which men wearing unpadded gloves would fight for hours.)

In 1895, the new Ingleside Racetrack opened on the site of today’s Ingleside Terraces neighborhood (Ocean View Course had closed in the 1870s.) Farley, now on the far side of all the action, moved his facilities to the intersection of Ocean and San Jose Avenues to meet the crowds coming from the Mission District. He also began promoting a new exercise machine of his own design and a health tonic he named “B. Farley’s Wonderful Discovery.” 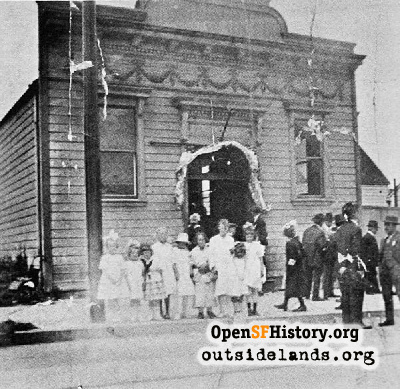 Hall owned by Barney Farley on the west side of Brighton Avenue, just south of Ocean Avenue, 1910s. -

Farley moved one more time, to the 1100 block of Plymouth Avenue, to live with his daughter Florence, who married a promising boxer (and bricklayer) named James Anthony. The old man continued running training facilities, saloons, and even opening a dance hall, which he lent out to the growing St. Emydius Catholic Church for Sunday services.

In 1918, San Francisco Bulletin sports columnist Leon Meyer paid Farley a visit out at his place on the Ingleside road to talk about the passing of the great boxer John L. Sullivan. Seventy-eight years old, with fifty-two of them spent in the area, Barney gave the newspaperman a tour. He pointed out photos on the wall of the famous boxers who had sparred at his training quarters, and declared Sullivan the greatest heavyweight of all time. He opined that liquor beat the champion no man could defeat, that drinking was Sullivan’s downfall. That comment reveals one of the most interesting aspects of Barney Farley. The longtime sporting man, roadhouse operator, and saloon keeper claimed never to have taken more than five drinks of whiskey or beer in his life. An occasional glass of sherry was enough for him.