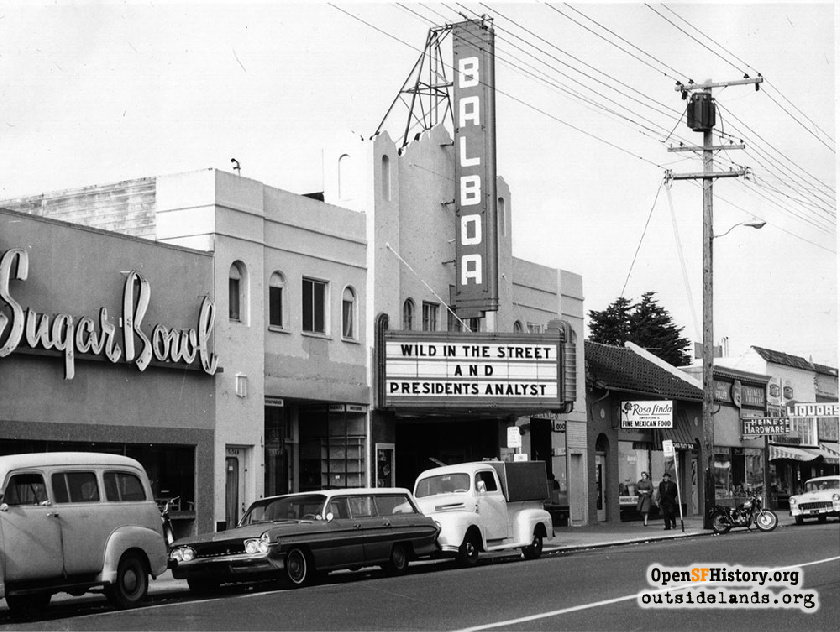 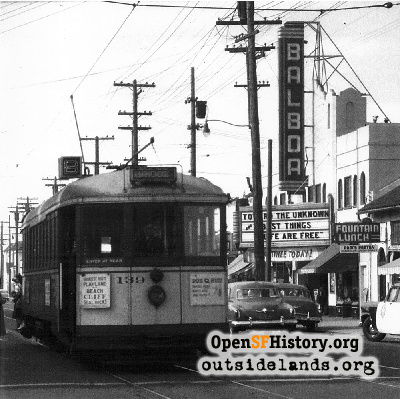 On opening day, Mr. [Samuel H.] Levin stated: "In building theaters nearest the home it is my aim to provide entertainment for them of a standard worthy of family patronage. In the New Balboa, as in all my theaters, I seek to supply the comforts and intimate surroundings associated with the higher ideals of home life."

Like the Alexandria and the 4-Star, the Balboa split from a single-screen to a mini-multiplex (two screens in 1978) to raise revenue. It's stayed open offering quality second-run films booked in double features. Some information from Gary Meyer's Balboa Theatre email newsletter:

The New Balboa (called that because of another Levin Theatre named the Balboa on Ocean Avenue) was designed by renowned architects James and Merritt Reid who designed the Cliff House, Fairmount Hotel, Spreckels Temple of Music in Golden Gate Park and numerous other theaters including the Alexandria and Fox Redwood City. The Levin family had continuously operated the Balboa until February 2001 when they asked Gary Meyer to take over operation of the cinema rather than close down due to the difficult competition from new megaplexes and changing film distribution patterns. Meyer, an original co-founder of Landmark Theatres and film consultant, had many fond memories of seeing movies at the Balboa and decided to give it a try. Continuing the 76-year-old policy of playing second run engagements of quality movies in intriguing double feature combinations Meyer explained, "I just can't let another old theater close. This is an incredible neighborhood of family restaurants and businesses and our audiences appreciate the personalized attention we provide." 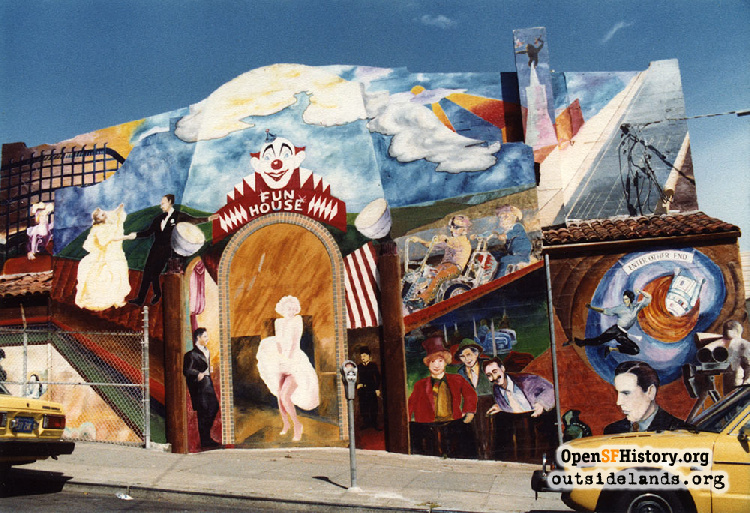 Mural on the back of the theatre (on 38th Avenue). Sadly this had to be painted over during renovations, and is long-gone. -

From 1926 through the late 1950s the Balboa changed programs 2-3 times a week. As the business changed, films showed longer in their first run engagements. Market Street was no longer the preferred first run exclusive engagement as movies tended to open around the bay area simultaneously. Our friend Jack Tillmany writes:

"In the mid-1960's the theater was getting long engagements of popular films. A claim to fame was landing the first and exclusive neighborhood sub-run of Sound of Music, which had played an unbelievable 92 weeks Exclusive Roadshow Engagement at the United Artists on Market Street, opening on 18 March 1965, and closing 22 December 1966. The Balboa picked up the exclusive sub-run (at "popular prices") and opened it on 25 December 1966 and ran it until 23 May 1967.

"Meanwhile, Doctor Zhivago was being unreeled for an almost equally incredible 66 weeks Exclusive RoadShow Engagement at the Orpheum from February 1966 until May 1967. (The San Francisco record is Around the World in 80 Days which played 94 (yes 94) weeks at the Coronet.) When Zhivago closed at the Orpheum on 14 May 1967, the Balboa dropped Sound of Music (after a mere 21 weeks), and picked up Zhivago on 24 May 1967, and ran it for 30 (yes 30) more weeks, also at "popular" prices, closing on 19 December 1967. Put this all together, and you see that for one entire year, they only played two separate films. They sure don't make them like that anymore."

In October 2011, the San Francisco Neighborhood Theatre Foundation took on a new lease from the Levin family, ensuring the Balboa's survival through 2024. 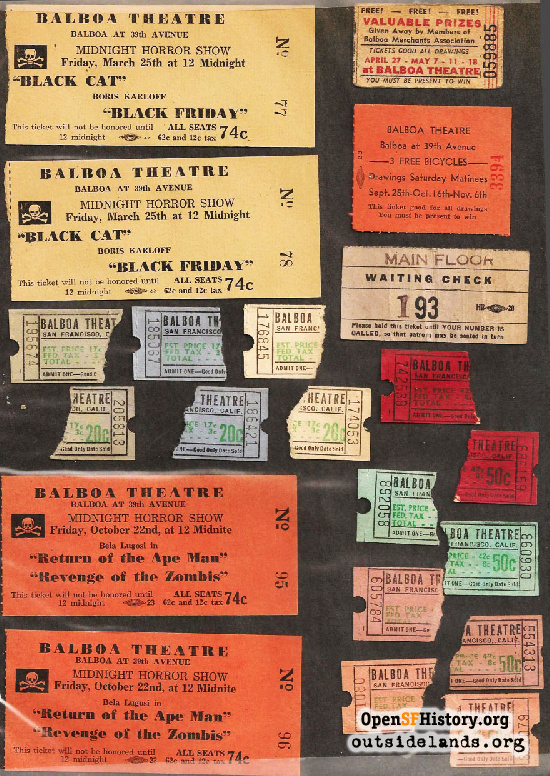 Ticket stubs for the Balboa Theatre in 1948 and 1949, including midnight horror shows such as Return of the Ape Man. -

Contribute your own stories about the Balboa!