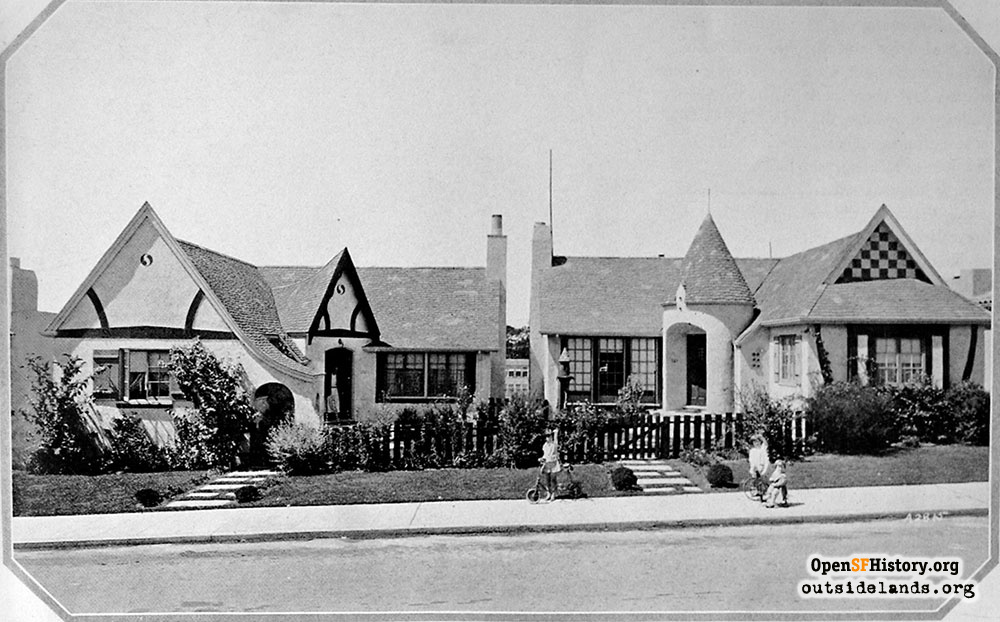 Lang Realty Company and Hueter Homes developed this residential park in the 1920s. 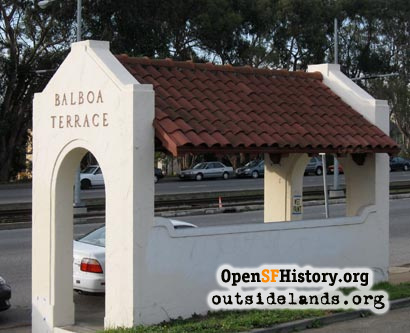 "Here scattered and inharmonious building has been eliminated in favor of a carefully restricted construction program whereby homes are built in groups, block by block, progressively as conditions permit."1

The usual way San Franciscans become aware of the residential park of Balboa Terrace is by seeing its name on the old-fashioned streetcar stop shelter on the east side of Junipero Serra Boulevard between Sloat Boulevard and Ocean Avenue. Drivers who take a quick peek beyond are given the pleasure of a wide pedestrian pathway framed by a semicircle entrance with swooping stone benches and ornamental light standards. The landscaping of the gateway, designed by civil engineers Punnett & Parez in 1920, oozes grandeur and pomp. 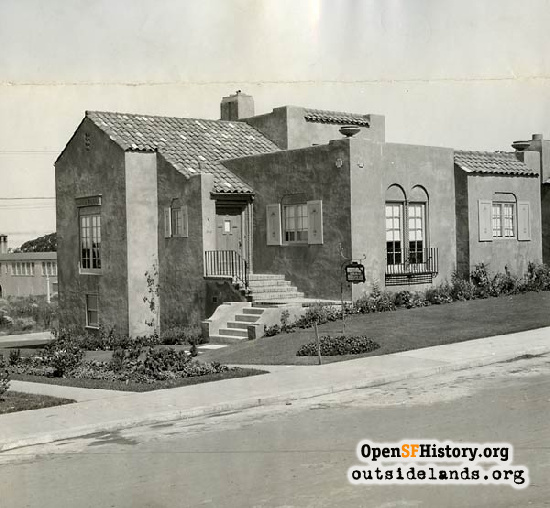 News copy for this view of 344 San Leandro Way in 1925: "One of a group of distinctive homes being completed in Balboa Terrace by Ernest C. and Oscar M. Hueter for sale by Lang Realty Company. Construction of another unit of four homes already is under way." , Aug 1, 1925 - San Francisco Examiner

On the edge of the Mexican land-grant, Rancho San Miguel, the property was under cultivation for decades before homes, streetcars, and wide boulevards invaded the area. From the 1880s to 1920s, Adolph Sutro's forest hemmed in the east side of the land while an open vista to Lake Merced and the Pacific Ocean sloped away on the west. The old Ocean Road, with its scattered bars and roadhouses, ran along the south side, just past the schoolhouse, now named Commodore Sloat Elementary.

In the early 1910s the Residential Development Company, a large syndicate led by the realty firm of Baldwin & Howell, bought most of Sutro's land north of Ocean Avenue and began platting tracts to become residential parks. The Twin Peaks Tunnel was being planned, and the vision of a new West of Twin Peaks district rode on its coat tails and its promise of a quick commute downtown. The firm of Mason-McDuffie bought a tract for St. Francis Wood and Newell-Murdoch one for Forest Hill. On John M. Punnett's 1914 plat map of the new neighborhoods the rectangular tract of Balboa Terrace was already set aside.

It was a prime location. The streetcar lines that exited the tunnel would run right in front of the planned subdivision. But while Forest Hill and St. Francis Wood had begun constructing large homes by 1914, Balboa Park still looked more like sharecropping fields than a housing development. The Balboa Terrace Company, which owned the land and which likely shared many of the Residential Development Company's board members, installed street improvements, gas lines, and water mains, but resisted selling the property lot by lot, instead waiting for one firm to purchase the land and construct a unified residential park. In May 1918 the company found its buyer. Newell-Murdoch, which was developing Forest Hill and was perhaps encouraged by the long-awaited opening of the Twin Peaks Tunnel a few months earlier, paid $100,000 for the property in May 1918.2

Newell-Murdoch ran into money problems at the end of the 1910s. Debts and World War I construction restrictions pushed the company out of the housing development business and the official plat map for Balboa Terrace, designer by Punnett and Parez, was filed in 1920 by John Rosenfelds' Sons Company, represented by the Lang Realty Company. Soon after, Balboa Terrace was purchased by Ernest C. and Oscar M. Hueter, brothers and self-described capitalists.

The earliest Balboa Terrace homes were constructed in the center of the tract on the east side of San Leandro Way. R.W. Lawton of the Howard Automobile Firm bought one of the first homes, a $12,500 bungalow.3 By 1921, the new Christian Science Church, designed by Henry Gutterson, had been built and Lang Realty announced new homes of the "English cottage type." Jacque Van Meurse, local representative of the Holland-American Steamship Company, purchased the corner of Monterey and San Benito Way. William Klaasen lived next door in a new $18,000 Colonial style home. "English cottage" purchasers included Frank Hoel, importer, who bought on Santa Ana Avenue for $10,000. Carl Neuman and Frank S. Thompson each paid $12,500 for their San Leandro Way homes.4 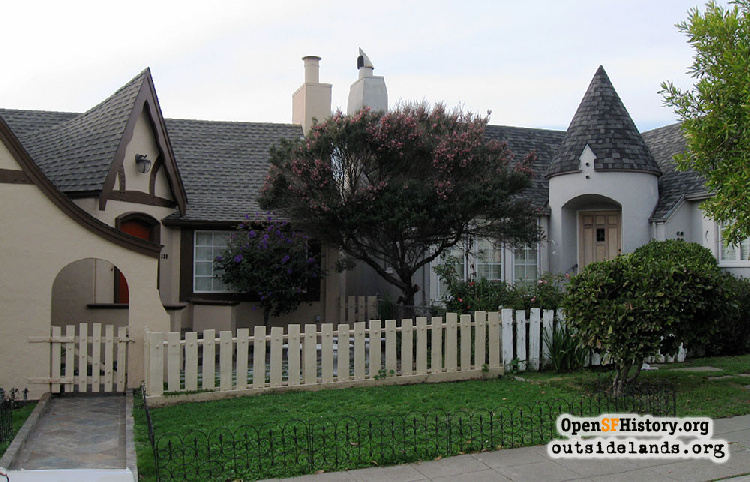 Balboa Terrace was very much a team project. Ernest and Oscar Hueter owned the property. The Lang Realty Company acted as the sole representatives of the tract. Architect Harold Stoner designed the homes, and Walter Zweig supervised the construction. The Langs, Hueters and Zweigs were all related in different ways, so it was also a family operation.

As economic conditions improved in the mid 1920s, Balboa Terrace began to fill in with Stoner's storybook homes, all with an element of fairy tale and romance about them. Spanish Colonial Revival was sweeping the city and rustic modular stucco homes went up beside the Tudor and English garden cottages. Easements in the center of the blocks put the garages at the back of the homes, giving the streetscapes a more unified and clean appearance. 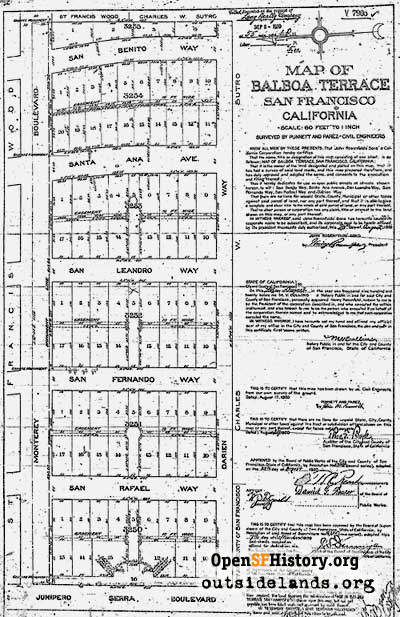 In 1924 the Hueters purchased from Charles W. Sutro thirty-six acres to the east and south of Balboa Terrace for $325,000, expanding the development to the east side of today's San Aleso Avenue. The Hueters broke the rectilinear grid pattern of the original subdivision in the extension, allowing the streets to bend with the hillside and form graceful arcs down to Ocean Avenue. The Hueters and Lang firm announced that they would immediately have "street work put in, the tract subdivided and sold for high class homesites under strict restrictions."5

The Hueter brothers toured model examples of residential parks in various cities6 and the Balboa Terrace restrictions were common for such communities at the time: minimum construction prices and building setbacks, lots reserved for residential use only, and ownership and occupancy limited to a certain ethnicity. The deed restrictions, conditions, and covenants issued by the Balboa Terrace Homes Association in 1924 directed that "...[property owners] shall not convey, lease or rent the said premises, or any part thereof, to any person or persons other than those of the Caucasian or White race." The legality of such racial covenants was struck down in the late 1940s.

Larger homes also took root in Balboa Terrace in the booming 1920s. The smaller bungalows were joined by two-story houses. R.D. Lang's Balboa Terrace residence, self-described as a "pretentious home," was designed with "Italian villa" features.7 Architect Harold G. Stoner gave the buying public---who were purchasing Balboa Terrace houses for as high as $20,000---what they wanted: Spanish Colonial and Italian Renaissance Revival buildings with lots of stucco and decorative tile.

The development of Balboa Terrace reached it apogee in 1926, when it was featured in The Home and Garden Beautiful magazine and called "one of the show places of the Bay Region."8

Advice to all who aren't driving by Balboa Terrace: there's no public transit stop at the old streetcar shelter. 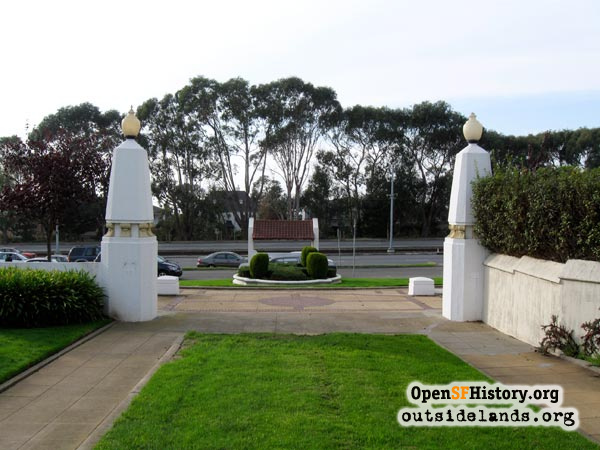