How the Richmond District fared after the 1906 earthquake and fire. 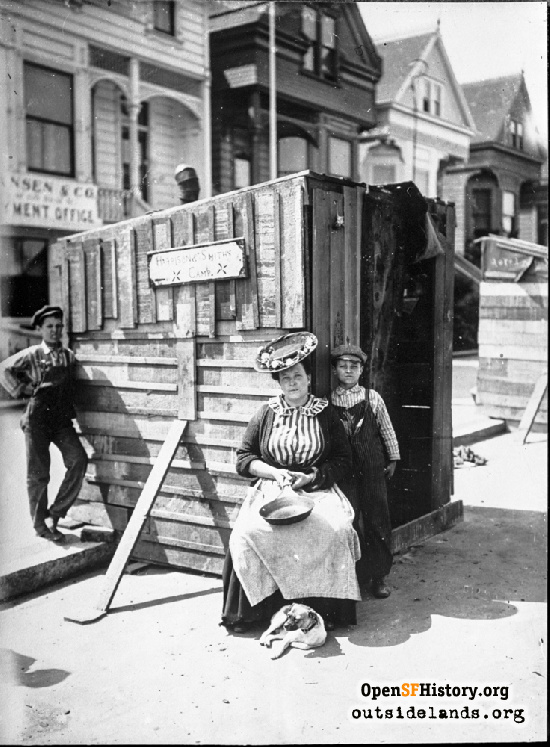 The Richmond District is particularly lucky in that many runs of its weekly newspaper, the Richmond Banner, survive. From editions of 1906 and 1907 one can reconstruct some idea of how this western neighborhood survived San Francisco's great disaster.

To anyone with a passing interest in San Francisco history the images are familiar: massive billows of black smoke, wagons piled with belongings, be-hatted citizens lying on park hills observing the disaster unfolding. And then there are the photos of food lines, lonely cable cars standing amid rubble, the landscape of relief tents, and the lopsided Victorians caved in to one side.

Though you might not find a mention in the hundreds of articles and books dedicated to the great disaster, the Richmond District also rolled through San Francisco's 1906 earthquake. Spared the fire that eradicated most of the city east of Van Ness Avenue, the Richmond still had its share of ruined buildings, curbside cooking, and deaths; and like San Francisco as a whole, the Richmond found itself profoundly changed in ways both immediate and lasting.

At the turn of the twentieth century the open spaces of the Richmond had attracted larger institutions in search of space for grander buildings and more land. So on the morning of April 18, 1906 more than just small wood frame cottages dotted the western landscape. Substantial buildings suffering major damage included the brand-new St. John's Presbyterian Church on Arguello (then First Avenue), the French and the Children's hospitals, Sutro school, and the Columbarium (surrounded by the jumbled headstones of the Odd Fellows Cemetery).

The entire front of the building collapsed and now covers the once-beautiful flower garden surrounding the house. The walls are cracked in some places to the width of six and eight inches and some of the principal corridors are almost impassable, so completely was the interior demolished. There were 125 children in bed at the time of the shock. A panic could not be averted. 1

Plaster came off the walls of homes and stores and most chimneys were put out of commission. A cottage at 326 Eighth Avenue did almost a quarter spin getting knocked off its foundation. 2 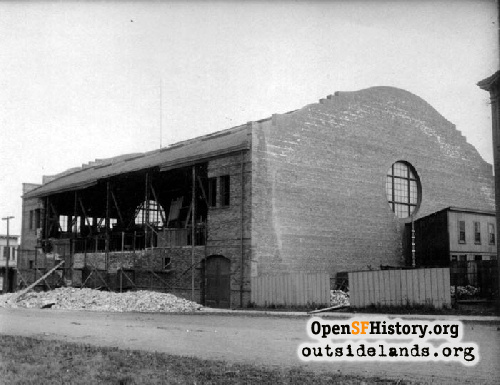 Casualties were relatively light. On Fourth Avenue Miss F. H. Barrett suffered a fatal heart attack during the temblor, and one Richmond district couple was killed in Santa Rosa when the brick hotel they were stopping in for the night collapsed. 3

Then there were the heavy sleepers living over on Nineteenth Avenue and Clement Street. Mr. and Mrs. A.F. Sonburg, who owned a grocery store, woke up shortly after the quake, and noticed a small fire at the neighbor's house. Alarmed, Mrs. Sonburg jumped up to telephone the fire department from her store and came upon the shelves in disarray and all the groceries, cans and boxes scattered on the floors. Befuddled, the couple eventually reasoned there could have been an earthquake. 4

Whatever shake-ups, tragedies and anecdotes the Richmond experienced on April 18, few would have predicted the big changes coming the neighborhood's way in the following months.

In the immediate aftermath of the disaster, there were neighbors left homeless by the destruction of their homes who needed aid, but an even larger population of San Franciscans coming west to escape the flames. Families took in relatives and friends who had been burnt out. The parks, empty lots, and mostly undamaged public buildings (such as the Richmond School, now the site of Roosevelt Junior High) housed small communities of refugees.

Local citizens formed the "Richmond Relief & Safety Committee", not only to look after the welfare of the residents and refugees, but also to protect the neighborhood's property, as looting and other forms of lawlessness were major concerns. A relief station on Clement near Sixth Avenue distributed food and clothing and offered services to the entire area west of Divisadero Street. By June, the committee turned over their duties to the Red Cross and the formalized relief efforts that had been organized citywide. Before it disbanded, the committee issued a resolve that it was "unalterably opposed to the establishment of Soup Houses in this district." 5

Those residents worried about the introduction of soup houses likely didn't foresee a few blocks of the Richmond established as the site of 1,600 refugee shacks housing thousands. 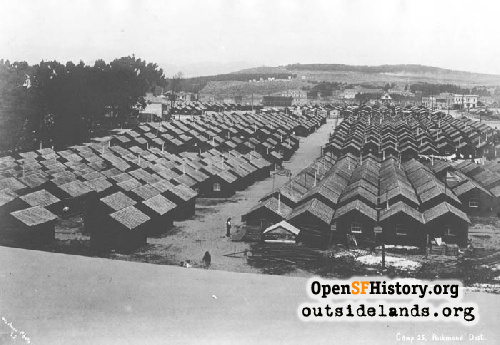 In the last week of July the Richmond's Thirty-Ninth District Improvement Club instructed its secretary to "communicate with the authorities to learn the status of the Park Panhandle at Thirteenth avenue, and endeavor to have the work of improvement commenced at once." At the same meeting the club also urged the Relief Commissioners to "hasten action in providing houses for the refugees now camping in parks." 6

Improvements of a sort did visit the Park Panhandle (today's Park-Presidio Boulevard), and a housing solution was found when Camp Richmond opened November 20, 1906. At its largest capacity in May of 1907, the shacks lined up on Park Presidio housed over 4,000 people. 7 From the first relief efforts after the fire, newspapers big and small struggled to define those in refugee camps. The San Francisco Chronicle assured folks that there were "Good Citizens Among Refugees" and mentioned that Camp Richmond had a "heavy population of Hebrews". 8 The Richmond Banner reported that the refugees "represent people in various conditions. Some who are refined and some who are far below them. All losers in the April fire." 9

During a contentious streetcar strike in May 1907 Camp Richmond received some notoriety as residents expressed their solidarity with the workers by hurling bricks at the Sutter-street line. "The presence of ladies in some of the cars did not deter the woman refugees from hurling heavy stones and bricks through the windows, scattering glass all over the floor and splintering wood." 10

More police were requested for the camp, and its proximity to a strip of bars along Fulton Street (nicknamed "Beertown") led to a few incidents. 11 (Drunkenness was the number one reason for expulsion in the relief camps, which were run in a military fashion.) 12 But at least in its first months, the Richmond tolerated and even took some neighborhood pride in Camp Richmond, and the business its residents could bring the district:

Whatever may be said of other refugee camps, this one in Richmond seems to have settled down to a busy, happy and contented permanence. Snug little stores are springing into existence and to an appearance of prosperity, all along Thirteenth avenue. There are grocers, booksellers, cobblers, barbers and verily! A beauty doctor to cure the complexions of susceptible vanities. Even the Italian has a store for the sale of his delectable dish, macaroni and spagetti. 13

Other new residents weren't as welcomed:

We understand that women of the town have succeeded, under false pretenses, in securing residences in several places in the district. The houses are now conducted very quietly, but they are nevertheless very undesirable. House owners should be very careful in letting their places, as it is extremely difficult to get rid of these women when they once get into a place. Since the fire the women from the tenderloin have been scattered and are now securing houses in any part of the city where they can get a hold. We want none of them in this district, and every effort should be made to keep them out. 14

And at a meeting of the Point Lobos Improvement Club "the danger of the invasion of Chinese and Japanese in the district was discussed at length and every member of the club was urged to watch every part of the district and give all possible publicity to the location of undesirable residents." 15

When Camp Richmond officially closed January 1, 1908, its thousands of refugee shacks had moved to empty lots across the west side of San Francisco and beyond. Often combined in twos and threes, the shacks acted as starter homes and helped contribute to a population and building boom in the Richmond.

A construction frenzy was on all over the recovering city, and many Richmond residents now moved their "country cottages" to empty land even farther west, opening up their suddenly prime lots for flats and businesses. 16

Reading the neighborhood paper in the months following the quake, it appears amidst the hubbub of building and population swell the greatest danger to Richmonders was the traffic. Most editions of the Richmond Banner in 1906-1907 feature a pedestrian injury or death from being hit by carriage or run over by streetcar. The Richmond had primarily been the land of dairies in its infancy and the pioneer species of the locale suffered too:

Monday of last week F. Paton of 1620 Clement street lost two valuable cows. There were twenty-five cows crossing the street to the barn, when an approaching Sutro car was warned to stop but the motor man seemed to have lost control of the break and could not stop the car. One of the finest cows was struck and thrown in the air about fifteen feet and then run over as it reached the ground. The other cow was badly injured and had to be killed. 17

2. A photo of this cottage is in Denial of Disaster, Gladys Hansen & Emmet Condon, Cameron & Company; 1989.