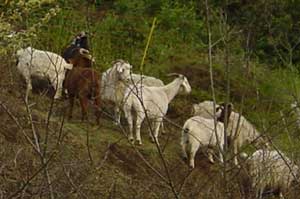 In early April of 2003 the San Francisco Water Department (through the Public Utilities Commission) set loose 500 goats on the southern slope of Sutro Forest near the Laguna Honda Reservoir. Supposedly used as a fire management tool, the goats began ravenously gulping down the undergrowth.

Turns out the PUC really was using the goats to clear out the vegetation and help eradicate small homeless encampments on the property. Unfortunately the goats indiscriminately began destroying acres of native plants critical to the survival of many species of butterfly and bird.

At the complaints of neighbors the goats were removed after a few days, but the issue isn't over. Other neighbors want the goats back to continue to keep the homeless campers at bay.

Thanks to WNP member Jack Barry for the photos! 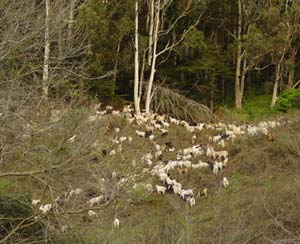