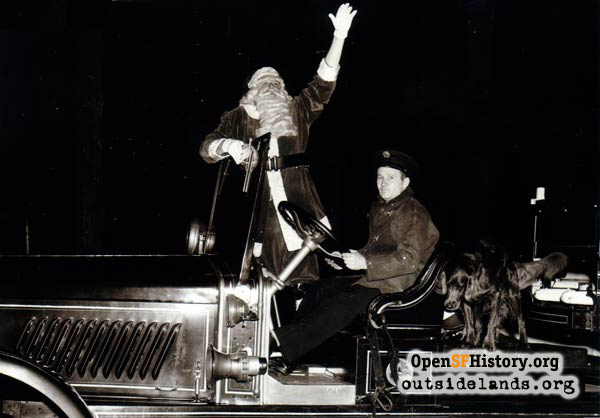 There’s a good deal of history sitting around in cardboard boxes in some western neighborhoods garages. That point was proven to me yet again when a former neighbor and St. Cecilia School classmate of mine recently sent me a large package of memorabilia that her late parents had been saving since they were twenty-somethings and new Parkside District homeowners back in the 1930s. 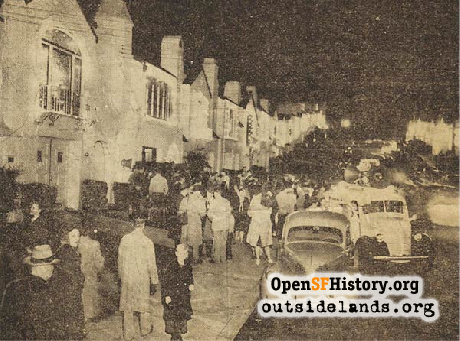 Mr. and Mrs. Meagher managed to save all the newspaper articles, photographs, and even the planning letters that were sent out regarding the annual outdoor holiday lighting event that ran on our 2600 block of 18th Avenue for more than thirty years, until the start of the 1970s. (Early Christmas gift for the Western Neighborhoods Project—the package is now on its way to the office archives!) The Meaghers were among the event’s founders, and they remained 18th Avenue residents from the mid-1930s when they were newlyweds, until each of them passed away more than fifty years later.

The homes on that block were built several years prior to the onset of World War II (back in 2009 I wrote about what they looked like when many of us were growing up in the 1950s), but I often wondered just how the holiday lighting tradition managed to get started.

It seems that back in the day, when communication with others was somewhat limited and less frequent because of the lack of modern transportation and electronics, many people spent more time socializing with those who were close by—namely, the neighbors. Shortly after that particular block of the Parkside was built, circa 1936, when many residents were still separated from others by sand dunes, those living on 18th Avenue between Vicente and Wawona Streets banded together to celebrate Christmas with outdoor lights. Wooden frames that matched the outline of each home’s front window were constructed by volunteers who were handy with tools. By attaching strings of outdoor lights to the frames, the annual set-up was quick and easy, and the lights were held at a uniform 90° angle from the windows, adding to the professionalism of each installation. 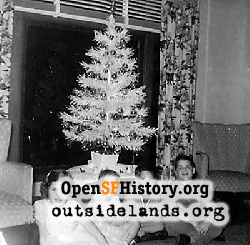 Author, right, and three of his cousins on the night of the annual 18th Avenue Christmas event in 1960. Careful readers will note that the Dunnigan family's 1959 aluminum tree has been replaced with an artificial white tree. - Courtesy of Frank Dunnigan

Every household seemed to have its own favorite lighting scheme over the years: traditionalists with red-and-green bulbs, some who favored one solid color, some with multi-color arrangements, others with all clear bulbs, and a few Jewish neighbors who went with a Hanukkah theme of blue-and-white. Our family’s front windows were outlined in peppermint red-and-white for years. As the homes sold, these frames were invariably passed on to the new owners, and many people added to the originals by building additional frames to outline garage entrances and front stairways. Every home had a Christmas tree, Hanukkah bush, large pinecone wreath, or smiling Santa face displayed in the front window.

The “Night of the Lighting” was the annual kick-off event held a Saturday or two in advance of Christmas. Grandma often took our family out to the Hot House at Playland for dinner on that night, since Mom’s kitchen was devoted to party preparations. To this day, Mexican food and salt air are forever associated in my mind with the weeks leading up to Christmas.

One household was voted “Mayor and First Lady” of the block for a one-year or a two-year stint. Reading over the list of names contained in those old newsletters produces a veritable Who’s Who of my childhood: Cal and Doris Meagher, John and Ellen Bernie, Roy and Ruth Kispert, Vince and Helen Kelly, Lou and May Deubler, Bill and Dorothy Kays, Jack and Judy Cronin, Warren and Genevieve O’Callaghan, Frank and Helen Norman, Owen and Mary Brady, John and Chris Barrett, Bob and Dolores Vidmar, Michael and Kathleen Baker, Walter and Carmelina Sanford, plus my own parents in both 1951 and 1952.

Each year Santa arrived on a fire engine, courtesy of the San Francisco Fire Department, just after dark on the pre-appointed Saturday night. The siren blared as the engine came down the hill from the 18th Avenue firehouse above Santiago Street, and that was the signal for everyone to turn on their lights, as the crowd of revelers gathered from all over the city. Children (and even a couple of the Moms) climbed into Santa’s lap, as he was seated on his throne in the First Family’s driveway, to tell him their wishes. Christmas carols blared from a nearby sound truck and hundreds of peppermint candy canes were distributed, with surplus boxes sent to one of the city’s many orphanages. 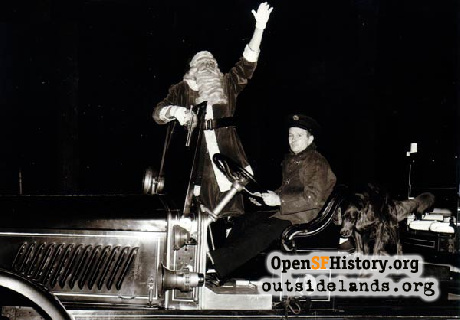 Throughout that Saturday evening, there were open house parties up and down both sides of the street, with neighbors inviting their family and friends to join in the festivities. For all of us kids, it was a chance to visit and get to know everyone—even families without children loved a good party and invited everyone in—and most of us still recall the events of those nights with a fondness that rivals Halloween and birthday celebrations.

Once the lights of 18th Avenue had been turned on, it was time for a lot of other annual traditions, too. The U.S. Postal Service used to deliver mail twice a day in December, and we looked forward to reading all the cards and Christmas newsletters aloud as we ate our dessert after dinner each night. Once school was out there would always be a streetcar ride with Grandma to visit Santa and go on the roof rides at the Emporium downtown. We would then check out the enormous City of Paris tree in the rotunda at Stockton and Geary Streets, look at the lights and decorations in Podesta-Baldocchi on Grant Avenue, shop for Mom and Dad at Woolworth’s at Powell and Market Streets (one box of English Lavender dusting powder and one bottle of Aqua Velva aftershave, year after year) before meeting Aunt Margaret, who worked in the Flood Building, and having dinner at Polo’s on Mason Street before riding the L-Taraval streetcar home along a bright, theatre-lighted Market Street.

If we were out visiting family or friends at night, Dad would always make it a point to drive past the lighted outdoor tree at McLaren Lodge in Golden Gate Park and also the one at Shriner’s Hospital on 19th Avenue, plus the living nativity scene at Lindley Meadow in the park, where we could get out of the car and watch the activities under the spotlights. How I wanted to be a shepherd, chasing after those wayward sheep with my staff!

December was also holiday baking time in most homes, and kids were often given walnut-cracking and cookie-decorating duties. The scent of bayberry candles filled the air and impromptu gifts of Chex mix packed in jars or paper plates filled with cookies, fudge, or brownies wrapped in foil and topped with a red or green bow, were exchanged with many of the neighbors. 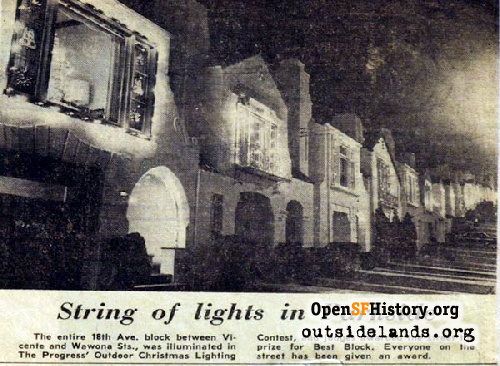 Reading all those old newsletters and articles was a peek back into a long-gone era. The 1941 letter noted that there had been 100% participation in 1939-40, and that:

We were one of the five scenes in San Francisco chosen by the Telenews for their newsreel, which they not only showed at their own Telenews Theater but also various neighborhood theaters...Come join with us and let the Yuletide spirit again reign supreme this year.

Sadly, that year’s plans, as well as those for the coming few seasons, were curtailed by the wartime blackout that was in place for each Christmas season from 1941-1944.

There were some heart-felt remarks contained in the opening sentences of the 1945 letter:

The San Francisco News (one of two daily afternoon newspapers back then—there were a total of four daily newspapers in San Francisco at the time, with the Chronicle and the Examiner publishing in the mornings, and the News and the Call-Bulletin in the afternoons) printed a special front-page section dated December 22, 1945 and marked “Clip here and mail to someone in the military service." Along with several abbreviated local news items, the photo and the lead story were about the 18th Avenue holiday lights:


Christmas trees and electric decorations are gleaming again this year for the first time since Pearl Harbor. One of the gayest decorated residential streets in town is the 2600 block of 18th Avenue, between Vicente and Wawona. Yessir, the old town is real Christmasy again this year and we wish all you guys and gals could be home right now to enjoy it. 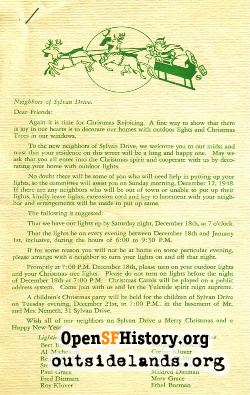 1948 letter to residents on Sylvan Drive to decorate houses for Christmas. - Courtesy of Christine Meagher Keller

A San Francisco Call-Bulletin columnist named Jack S. McDowell (writing in a style similar to that of the late Herb Caen) noted on December 1, 1948 that the 18th Avenue holiday lighting tradition was then being practiced in many areas, including the first block of Sylvan Drive, just off Sloat Boulevard:


Seems this idea has been going on for some time on Eighteenth Avenue, about a mile and a half away. When the Sylvan Drive people let it be known they were interested, the Eighteenth Avenuers hurried over with all the details of their annual Christmas lighting plan and suggestions.

A little printed message [was sent] to all the residents: If you need help in putting up the lights, just let somebody on the neighborhood committee know and the neighbors will be over on Sunday morning, December 12, to lend a hand. Going to be out of town then? All right, just leave the lights and cord and arrange for a neighbor to get into your basement to make the connection. The boys on the committee will put ’em up for you.

McDowell’s column mentioned music, caroling, and parties scheduled for the first night, and how the lights would remain lit from 6:00 p.m. to 9:30 p.m. every night until New Year’s. He concluded with:


And somehow, after hearing all this, we got the idea that all the people who co-operate this way with their neighbors—without any idea of commercial gain—come out of the project with something pretty important added to their neighborhood, their homes and their family lives.

Amen, Jack McDowell—and a Merry Christmas & Happy New Year to you—wherever you are!

Epilogue: In Mr. and Mrs. Meagher’s thorough collection of artifacts, there isn't a neighborhood newsletter mentioning the end of this community tradition. My recollection is that the final year of all-out participation was about 1967 or so, when I was in high school. By then, many of the folks who had been faithful organizers were getting older, there were fewer children living in the neighborhood, and sadly, our generation of baby boomers never stepped forward to take over.

By 1968/1969, the kick-off event was skipped, and by 1970, participation had dropped by a full 50%, so that by 1971, a beloved neighborhood tradition of 30+ years had become little more than a memory—it’s now been gone for longer than it lasted—still swirling amid the fog and nearby eucalyptus trees, remembered so fondly by all of us who were there. Here’s a heartfelt holiday toast to Cal and Doris Meagher for setting up and maintaining a wonderful neighborhood activity—thanks for the memories! 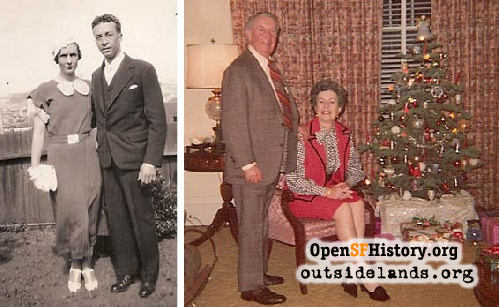