Now that it's September, my thoughts have been drifting back to my own school days in the Outside Lands, beginning 53 years ago this month in Mrs. Beckerman's afternoon Kindergarten class at Parkside School. Following that, it was off to St. Cecilia's, then to St. Ignatius (both Stanyan Street and 37th Avenue), plus University of San Francisco, and a brief post-graduate stint at San Francisco State.

Now I'll admit to being somewhat out of the loop when it comes to school rules that govern this second decade of the new millennium. Recently I was shown a copy of S.I.'s Parent-Student Handbook, which convinced me, once and for all, that my own high school days took place in a massive time warp, on the most remote galaxy of some distant, uncharted solar system. I could not believe that so many new rules were now in place at my old high school.

Curious about what I had seen in S.I.'s rules, I explored further, studying a similar handbook issued by Mercy High School on 19th Avenue. Now please don't get me wrong—I am definitely NOT criticizing these two rules or the need to have such rules today. It's just that seeing some of these regulations in print forces me to acknowledge how very different things are since I was part of the high school scene from 1966 to 1970.

First of all, the rules now take up a full handbook—our parents were sent just a few mimeographed pages of basics each summer before the new school year started. Short hair, shirts with collars, no jeans, and polished shoes were the basic dress standards back then. There was always the sketch of a Bruce Bary-attired guy (complete with requisite horn-rimmed glasses), contrasted with a T-shirt-and-jeans-wearing street thug, shod in "unpolishable" Clark's desert boots, looking like he should have a Marlboro hanging from his unshaven face, plus a beer bottle and a deck of cards in his hip pocket. We knew which one we WANTED to resemble and which one we HAD to resemble, without a lot of words being written. S.I., which has been co-ed since 1989, now has a Dress Code covering 17 paragraphs across many pages, and includes words that never appeared before: "bare midriff," "bleached hair," and "multiple body piercing sites." Likewise, the Mercy handbook goes into great detail on this subject, even though there is still an official school uniform requirement in place there. 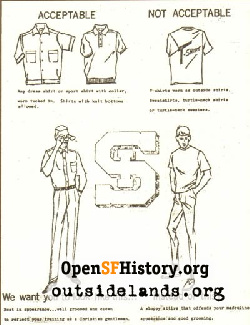 In the past, smoking was the big NO-NO, but S.I. now covers it in just two lines—summarized as "not within 5 blocks of school." Mercy goes into extensive additional detail, reminding both students and parents about health issues, and a stern reminder that purchasing or possessing cigarettes is a violation of California law for those under age 18, while recommending smoking cessation programs.

In the 1960s, S.I.'s policy on alcohol was simple: "don't get caught with any." By 1966 or so, that policy was expanded to include drugs: "don't get caught with any." Today, the alcohol and drug policy covers two pages of detailed print, including "the right to subject any student at any time while on campus or at any school event, including sporting events, on or off campus, to breathalyzer testing." While Mercy's rules do not call for impromptu testing, they do cite the legal penalties, including clear references outlining the criminal and financial consequences to parents for various violations. For those Mercy parents who may be doubtful, actual legal citations are provided, referring to specific laws by their numerical codes. This seems to be a subtle acknowledgement that perhaps girls are better controlled by parental influence and authority, while boys can best be deterred by the stark fear of being caught and embarrassed in front of their friends.

When we were teenagers—even when Dad and his older brother were S.I. students in the 1930s—the big fear that parents and teachers had was—oh my—a deck of cards and a pair of dice. Today, all forms of gambling are outlawed at S.I. neatly and cleanly in a single sentence, while the "Technology Policy" covers a whopping five full pages of do and don't reminders about computers, laptops, phones, software, texting, tweeting, and a variety of other electronic misbehaviors that were unimaginable 10 or 15 years ago, let alone in the Neanderthal times of the 1960s. Mercy's rules do not specifically address gambling (guess it's more of a "guy" thing), but they do go into far more extensive detail to prohibit a wide variety of electronic harassment activities, including "cyber-bullying."

S.I.'s rules for student conduct used to be summed up simply with a reminder that we should behave as "responsible gentlemen" at all times. Today, the rules for student conduct cover more than 10 pages, with references to every objectionable situation that any teenager could possibly dream up. Some of the ones that we never had to think about are (in alphabetical order): Alteration of Records (don't), Electronic Devices (appropriate and inappropriate uses of), Police Investigation (lengthy rule requiring cooperation with), Pornographic Materials (prohibition against), Public Displays of Affection (the forbidden ones are clearly and graphically identified in enough detail that you don't want Grandma reading these rules without her cardiologist in attendance), Weapons & Dangerous Instruments (all forbidden—including laser pointers, of all things), and something called Wrong Place/Wrong Time (be careful who you are hanging out with, because when they are caught doing something wrong, you are going to be in big trouble too, just because you were there at the time). Mercy has chosen to remind parents and students about additional issues such as: Courtesy to Cafeteria and Maintenance Staff and Proper Respect for Performers at School Events. I'm sorry, but beyond the age of Kindergarten, no one should have to be told this at all—the knowledge and daily practice of such basic courtesies should be a given, long before a person reaches high school. 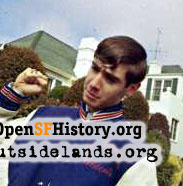 S.I.'s rules also include a rather cryptic, "No private tutors allowed on campus." What does that mean? Did some student actually show up for class with a note-taking tag-along, just to help out with studying later on? This evokes images of Dobie Gillis' rich buddy, Chatsworth Osborne, Jr. Further research is needed on the real story behind this new rule.

Behavior at sporting events is more thoroughly proscribed by the S.I. rules than by Mercy's. Among S.I.'s forbidden activities are: "Insulting the opponents' school or mascot, insulting opposing players, making unsportsmanlike, derogatory or obscene cheers or gestures." While I certainly support those ideas in principle, putting them into practice would seem to limit cheering to a rather unenthusiastic "GO TEAM!"—hardly the most rousing cheer that could be shouted from the stands. In today's world, it must be incredibly tough to be the head of the Art & Publicity Committee or the Rally-Dance Committee, both of which were always chaired at S.I. by guys who had fertile imaginations about slipping through a double entendre or two in posters and in cheers.

Even school dances are subject to some new regulations that would never have been deemed necessary in the past, such as S.I.'s "Freshmen are discouraged from attending the Junior or the Senior Prom." Discouraged? I don't think that any non-Junior or non-Senior would have had the audacity to try to attend one of those proms when I was there. And although most dances allow students to bring a "guest" (the word "date" is surprisingly absent) from another school, if a pass from the Dean's Office is obtained in advance, the venerable S.I. Christmas Dance is now closed to outsiders, thus forcing S.I. students to find a "guest" from within their own ranks. Face it, you don't always want to go to a dance with someone you've got to face as a Chemistry lab partner every day—definitely a romantic deal-breaker, though perhaps that is a very subtle part of the plan. Mercy has some unique rules, including a clearly stated prohibition on "inappropriate" dance pictures, clearly forbidding "sexy poses, sunglasses, dates with hats or caps." This rule makes ruffled shirt fronts, oversized velour bow ties, Madras jackets, and other sartorial splendors of the past (that freaked our parents out big-time) look pretty mild in comparison. While S.I. specifically bans laser pointers at all times, Mercy declares "Glow sticks and any glow items are not allowed at dances."

Speaking of dances, there were always chaperones—a handful of faculty members and a few parents—whose kids usually danced in the far corners of the gym or else stayed away altogether—to ensure proper decorum. If a couple was getting a bit too romantic, a chaperone could always manage to undo the situation with an icy glare or by sending another student to "cut in." Today there are numerous clearly spelled-out descriptions in the S.I. handbook that define "sexually explicit dancing" in detail (again, don't let Grandma read that section unsupervised), and the penalties for rule infractions are clear—parents will be called to take the student(s) home and disciplinary action may follow. Mercy simply cautions students against "dirty dancing" with essentially the same penalties.

The rule that surprises me the most (and was probably the most frequently violated one in my day) is S.I.'s Off Campus Without Permission. A full week of detention is the penalty for the first offense, and after that, "A second offense, any time throughout a student's term at St. Ignatius, will result in automatic suspension from school." Whew. Some of us should be grateful that these rules don't have a retroactivity clause! Mercy takes the same stand against unauthorized absences, but there, the penalties are not nearly as severe as at St. Ignatius. Again, like gambling, probably more of a "guy" thing. 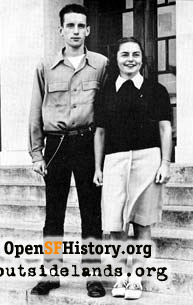 Given the fact that S.I. went co-ed in 1989, there is, of course, a "Pregnancy Policy," and it's a rather enlightened "continue with classes as long as medically advisable," combined with a clear prohibition on abortion as an option. I can think of some priests and nuns in days gone by who might have advocated public stoning, but the Jesuits, for the most part, have always been far more practical when looking at the realities of life. Mercy's policy is a bit more circumspect, being entitled "Pregnancy & Marriage" and stressing that decisions are made on a case-by-case basis, yet there is no guarantee of continued school attendance, nor, surprisingly, any clear statement of the Catholic Church's opposition to abortion.

Surprisingly, only nine Jesuits appear in the lengthy listing of S.I.'s Administration, Faculty, and Staff, while Mercy has only three nuns in their list. However, knowing a handful of current Catholic school faculty personally, I am convinced that they are all academically very bright people who have the ability to communicate well with the students. Reading the list of names and viewing photos on the Web sites of both schools further convinces me that S.I. and Mercy have both achieved significant diversity of gender, race, and ethnic background among their teaching and counseling staffs, so that today's broad spectrum of the student populations at each school is well reflected.

For all the changes, though, it is clear that some things remain the same across the years:

WHEW! Those schedules are far more than my addled brain can comprehend at this age, so I guess it's a good thing that high school is still for teenagers.

Hmm… I wonder if I could still ace the Standardized Aptitude Test (SAT) with the same 1490 score that I made back in the Fall of 1969?