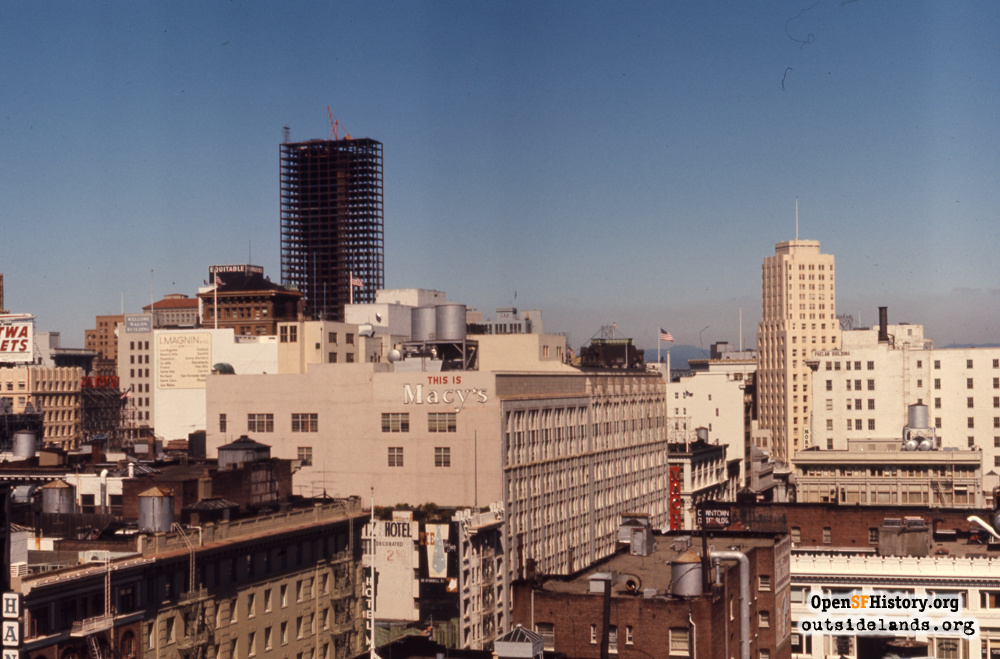 Memories of San Francisco as it was fifty years ago.

The year 1967 brought many changes to San Francisco—some of which have already been well-documented by the Western Neighborhoods Project (listen to this podcast on the Human Be-In). Music and social norms were changing, paisley patterns were suddenly IN, and many new international celebrities (remember Twiggy?) were just gaining fame. Some other changes included:

Airport—In November 1967, San Francisco voters approved Proposition A, a whopping (at the time) $98 million construction bond for SFO—back when the airport had only two terminal buildings—one built in 1954 and another in 1963. Public parking spaces numbered an astoundingly small 6,100—mostly in outdoor surface lots. New construction projects continued to unfold for the rest of the millennium.

Banks—San Franciscans had many banking options in 1967, though many are gone today: Bank of America (now far fewer branches), Hibernia Bank (taken over in 1988 by Security Pacific which was later acquired by Bank of America in 1992), Crocker-Citizens Bank (later, Crocker Bank, which merged with Wells Fargo in 1986), Eureka Federal Savings (seized by government regulators in 1988), First Western (acquired by Union Bank in 2001), United California Bank (became First Interstate Bank in 1981 and taken over by Wells in 1996).

BART—By 1967, BART construction had been underway for three years. The 57 sections of the Transbay Tube were still being lowered into place one-by-one, as the tunnel between Oakland and Contra Costa County under the Berkeley Hills was also under construction. San Francisco’s Market Street was beginning to experience serious BART/MUNI excavations—a slow-moving project that produced monumental streetcar delays. Revenue service between Oakland and San Francisco was still five years into the future, not commencing until September 11, 1972. 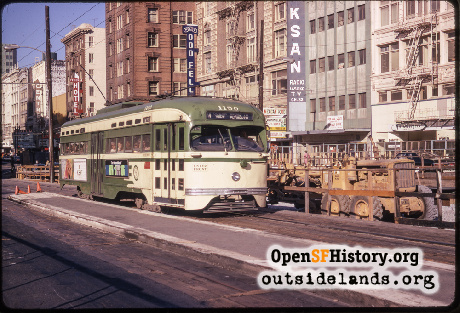 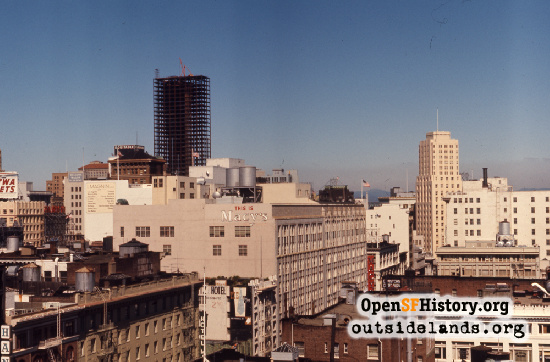 California Politics—In November 1966, former Hollywood actor Ronald Reagan scored a surprising upset against incumbent Edmund G. (Pat) Brown, who was running for an unprecedented third term. On January 5, 1967, Reagan took the oath of office at midnight upon an astrologer’s advice that it was a particularly auspicious time.

Employment—The unemployment rate in 1967 was at 3.8%—historically very low, meaning that most people who wanted a job were able to find one without much difficulty. Major employers at the time included government, hospitals/health care, banking/insurance/finance, shipping, and retail, with some forms of manufacturing beginning to decline, as tourism was rising.

Football—In 1967, the San Francisco 49ers were beginning their 18th year with the NFL at the old Kezar Stadium. Owners were the Morabito family and head coach was Jack Christiansen. It was a mediocre season for the team, with a 7-7 win-loss record.

Housing—The Golden Gateway complex opened in 1967 on the site of San Francisco’s old Produce Market adjacent to the Embarcadero. Real estate ads offered Sunset District homes for about $35,000, and one-bedroom apartments at Parkmerced were renting for $150 per month, with parking and utilities included.

Landmarks—The Landmarks Board was established in 1967, resulting in increased public awareness about the need to protect San Francisco’s architectural, historical, and cultural heritage—particularly after the demolition of Market Street’s Fox Theater in 1963.

Mayoral Politics—Early in 1967, 62-year-old Jack Shelley occupied the mayor’s office at City Hall. Elected in the fall of 1963, he was San Francisco’s first Democratic mayor in 50 years, and the last born prior to 1906. For decades, he had served in the State Legislature and later as a member of the House of Representatives.

As the 1967 election began to take shape, Shelley faced Republican opposition from restaurateur Harold Dobbs who operated the Mel’s and Red Roof chains, as well as from Democratic State Senator J. Eugene McAteer, who was more than a decade younger and considered by many political observers to be the front-runner.

Following McAteer’s untimely death from a heart attack at age 51, while playing handball at the Olympic Club on May 26, 1967, Shelley came to be viewed in some political circles as being vulnerable in the November election. On September 8, he withdrew from the race, citing health issues. Within hours, Joseph L. Alioto, a prominent attorney and one-time finance chair of the McAteer campaign, entered the race. He won the election and held the Mayor’s office for two terms from 1968-1976.

Movies—Moviegoers still enjoyed films at the Alexandria, Amazon, Bridge, Coliseum, Coronet, El Rey, Granada, Northpoint (opened June 1967), Parkside, and Surf theaters, plus many others on Market Street and in the Mission District. Today, only the Balboa, Empire, Stonestown Twin, and 4 Star remain in the western neighborhoods.

Newspapers—Following a 1965 agreement between the Chronicle and its morning rival, the Examiner, the latter became an afternoon newspaper, with the old News-Call-Bulletin folding. The San Francisco Progress was a small-circulation neighborhood paper that was not widely read, while the San Francisco Shopping News dispensed information about annual January white sales on sheets and towels. 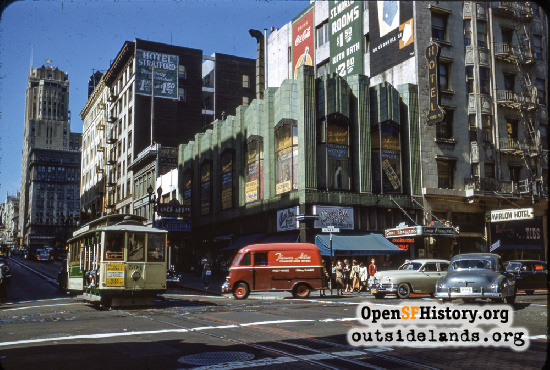 Schools—In 1967, 25% of San Franciscans were under 18 years old (today, only 13%). Lowell High School was enjoying its new campus, then just four years old, on Eucalyptus Drive, Poly was still thriving, and Balboa won the Turkey Day football rivalry at Kezar, beating Lowell 14-0. Cathedral High School opened adjacent to the construction site of the new St. Mary’s Cathedral, and the school began a collaborative life with nearby Sacred Heart High School, finally merging 20 years later. Bulldozers began moving sand at 37th and Quintara for the present campus of St. Ignatius (opened in 1969), which was then operating in a decrepit 1929 building on Stanyan Street.

Shopping—San Franciscans were still mourning the 1965 closing of the White House department store, yet there were still many choices for clothing, accessories, gifts, and household goods—City of Paris, Emporium, Granat Brothers, Gumps, H. Liebes, I. Magnin, Joseph Magnin, Livingston’s, Ransohoff’s, Roos-Atkins, and Sommer & Kaufman. J. C. Penney still operated at the corner of 5th and Market Streets, Hale’s was on Mission Street, while Sears had two stores: Geary Boulevard and Masonic Avenue and Mission and Army Streets. Stonestown was still an outdoor mall, just 15 years old, and GETs (Government Employees Together—a membership discounter) was thriving at Lakeshore Plaza on Sloat Boulevard. Williams-Sonoma was a tiny, one-store business on Sutter Street—with no catalog. Most retailers, including grocery stores, were closed on Sundays.

Television—There were only three networks in 1967, plus KTVU and KQED. That fall, a new crime drama, Ironside, debuted, featuring former lawyer Perry Mason (actor Raymond Burr) re-cast as a San Francisco police inspector confined to a wheelchair after a service-related injury. The episodes highlighted the classic old Hall of Justice on Portsmouth Plaza, plus many iconic local street scenes. 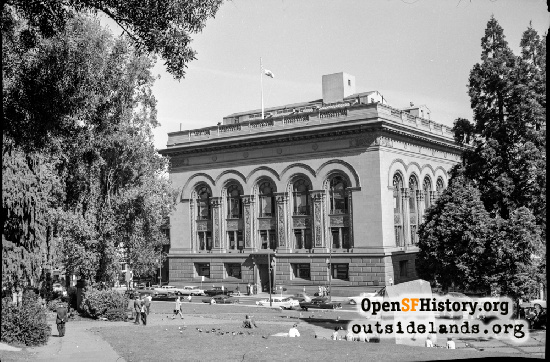 Old Hall of Justice at Washington and Kearny, facing Portsmouth Square. Park scene in the foreground., 1959 -

Theater—American Conservatory Theater (A.C.T.), founded in Philadelphia in 1965, relocated to San Francisco to take over from the struggling Actors’ Workshop. The group presented its first local live stage production at the Geary Theater in January 1967, and is celebrating its 50th anniversary there this year.

Yearbooks—High school yearbooks began to change in 1967. New, larger formats, contemporary photos and fonts, and fresh approaches appeared at many schools. Washington High School’s 1967 Surveyor told readers, “This yearbook has introduced many innovations. Perhaps the most obvious change to appear in the Surveyor is the variation in the class section layouts…ending the seemingly endless pages of tiny classmate pictures. The cover of this book also varies from the traditional…its simplicity is striking and its design reflects our times…”