The former Stonestown restaurant brings back a lot of memories 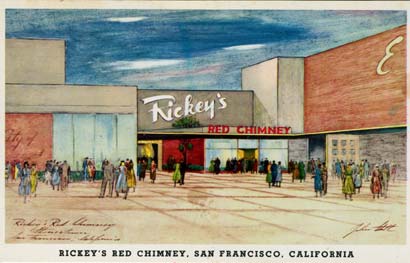 Nestled next to the old Emporium department store in Stonestown, Rickey's Red Chimney restaurant was a dining destination for west San Franciscans for decades. "Rickey" sold out sometime in the late 1960s and most folks knew the place as just "The Red Chimney". Some of the red bricks are still visible in a lonely eastern corner of the new Stonestown Galleria.

Some of the memories of the Red Chimney from our message board:

"The fountain in front of the Red Chimney restaurant was really cool and I used to love to play there when my mom tried on shoes at the shoestore next to it." - Nick

"Funny, many years later (in the 70's) the Red Chimney became kind of a hot spot for music - anyone remember Bubba Lou and the Highballs (Dick Bright, Bob "Bubba Lou" Vickers - now known as Bud E. Love) - Little Roger and the Goosebumps, Bobby Freeman (yes - "The Swim" Bobby Freeman) and many others. Dick Bright and Bubba were known for bringing people onstage to sing with them - some professional - some (very) amateur - I was one of the amateurs!! I sang onstage at the Red Chimney one night with Jane Dornacker and Bill Spooner (of the Tubes) - ah, yes, the 70's!!" --- Karen Ann Bosso

"Rickey's Red Chimney in Stonestown was a step up the ladder. It was in the same league with the Town House Restaurant in Lakeside Village." - Norman Stahl 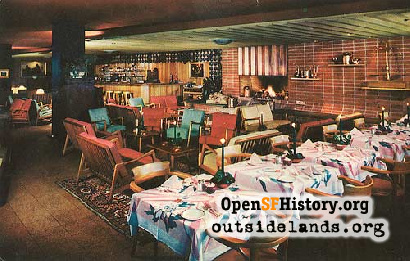 Interior of Rickey's Red Chimney at Stonestown. Postcard image possibly from the 1960s., 1960 -

Contribute your own stories about The Red Chimney!

Contribute your own stories about your neighborhood!