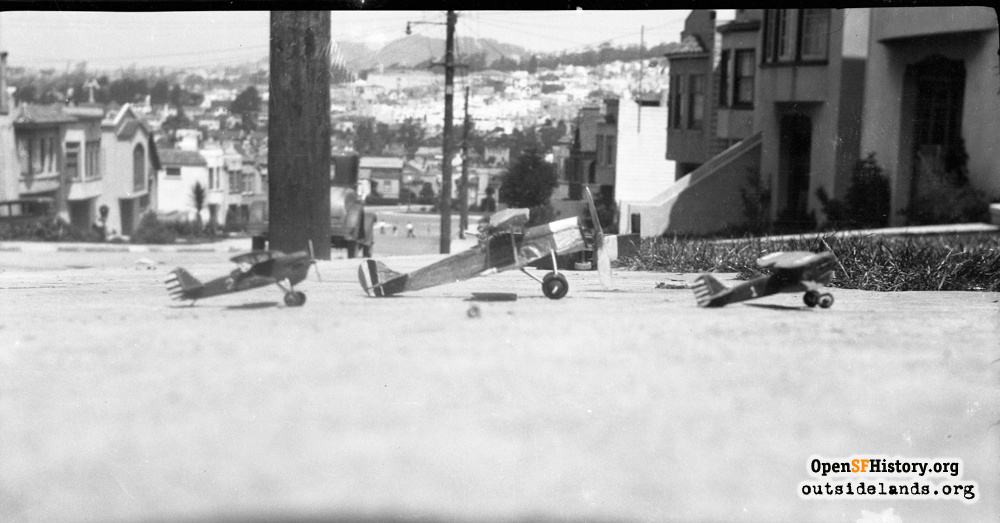 Aviation in the Ingleside

When land along Ocean Avenue acted as airstrips for early planes and flying machines.

Aviation in the Ingleside

(Originally appeared in The Ingleside Light, 2011) 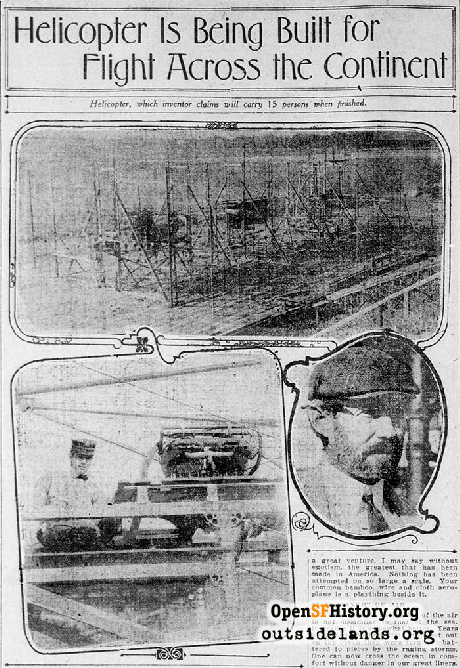 Flying is a commonplace miracle today. Perhaps a thousand airplanes and jets escape the bounds of earth each day, casually carrying human beings into the realm of eagles and angels. We take our ability to travel by air for granted, while at the same time understanding that the design, construction, navigation, and piloting of these giant metal machines is the work of scientific expertise and engineering beyond the understanding of the average passenger. But one hundred years ago, in the first decade of our ability to take off into the air, our attitudes and understanding were the reverse: flying was a wonder and the expertise to do so more egalitarian.

Less than ten years after the Wright Brothers made the first controlled, powered, and sustained heavier-than-air flight, many of the creators and pilots of airplanes and gliders were bicycle repairmen, hobbyists, and teenagers. In San Francisco, 15-year-old twin brothers Willy and Arthur Gonzales constructed and flew a biplane of their own design over San Francisco's Richmond District in 1912. They made their contraption in the backyard of 435 16th Avenue using pine, spruce, bicycle spokes, and a 35-horsepower four-cylinder engine. In the Sunset District, other young men built gliders to launch from the high points of the sand dunes. The Ingleside District had its own role in local aviation history. Along Ocean Avenue in the early 1910s a man by the name of Willis Grant Murray conducted a secret project to build an airship capable of transcontinental flight, while up the road, exhibitionist daredevils cavorted in the sky and carried some of the country's first airmail.

Willis Grant Murray had good reason to keep certain details of his new airship secret. Rich men had invested in his $100,000 flying machine to initiate long-distance commercial flights and government officials were enthusiastic about its potential. To have design details of such a lucrative invention stolen would be catastrophic. So Murray rented space at the closed Ingleside Racetrack (today's Ingleside Terraces) and built his strange new aircraft in a gully out of view of passersby.

Murray understood some media attention was necessary, if only to attract more investors, so he granted a long interview to a San Francisco Call reporter in December 1910. The reporter had a difficult time describing Murray's invention, writing that it was "hardly nameable." The airship combined elements of the biplane, the dirigible (gas bags were used as ballast, but not to lift the machine), and the helicopter, with three automobile engines driving two fourteen-foot, two-blade propellers set at each end. A deck beneath the superstructure was intended to hold five crewmen and up to ten passengers and had aluminum boats attached as skids in case of a sea landing.

Murray was a confident sort. He calculated his ship would be able to fly six days and nights without landing, covering some 4,000 miles. He planned to get off the ground by May 1911, and if all went well, fly over the Sierras, cross the continent, and perhaps continue on to Paris. "It is a great venture. I may say without egotism, the greatest that has been made in America. Nothing has been attempted on so large a scale. Your common bamboo, wire and cloth aeroplane is a plaything beside it."

After dismissing the reporter, Murray tightened security. He hired men to chase away loiterers and the curious. The Call later noted that it was "doubtful if any government has guarded its secrets […] with more zeal than do the watchman of the airship." 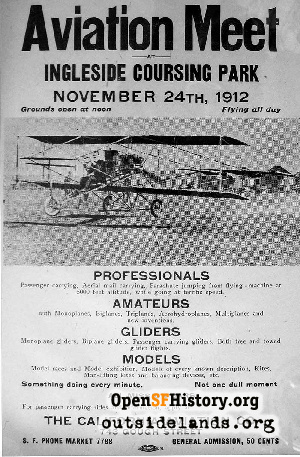 At the Ingleside Coursing Park, just a few blocks away at Ocean Avenue and Lee Avenue, humbler aviators hosted air shows in 1911 and 1912. Local daredevil pilot Roy Francis entertained crowds with flying stunts, speed tests, and even gave children rides. Eleven-year-old Gladys Grey took a spin through the clouds with Francis in December 1911, and the San Francisco Chronicle speculated she was "probably the youngest aeronaut in the world." The girl gushed that she had so much fun she wanted to take a plane trip everyday, but farther and higher. She might have revised her opinion after Francis' final flight of the day when he hit an air pocket and had to make an emergency landing in the Sunnyside, clipping an overhead wire on the way down and damaging his rudder.

Ingleside Coursing Park hosted an even larger aviation meet on November 24, 1912, in which one of the earliest transportations of mail by air took place. The postmaster opened a substation at the park for the day, "San Francisco, Cal. Aviation Post Office #1," and processed 47 pieces of mail, mostly postcards, for delivery. Pilot Harvey Crawford then carried the bag of mail through the skies to the Presidio. Crawford didn't bother landing; he just dropped the bag to the ground where a man retrieved it to take to the post office.

While mostly a publicity stunt at Ingleside, airmail had a brighter future than Willis Grant Murray's flying machine. Far from landing in Paris, Murray was still trying to get his 8,000-pound, 176-foot long, blimp/biplane/helicopter off the ground at the Ingleside Racetrack in February 1912. Joseph Leonard had bought the property, and at the time his crew was busy grading the land and building the first houses for Ingleside Terraces. Murray rushed to make his invention air-worthy, but heavy winds kept ripping the hydrogen gas bags asunder and damaging the frame. The Murray Airship was a failure and its inventor died in 1919. The country would have to wait until the 1930s for the first transcontinental commercial flights.