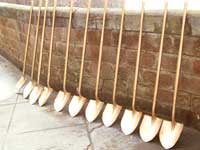 (Click here or on group photograph for larger image and more details.)

The acrimony and controversy that attended many of the renovation discussions weren't to be found on this day. Rangers, community group leaders and some local press noshed and mingled. Folks who had worked and waited a decade for this moment included Dan and Mary Hountalas (who run the Cliff House restaurant), architect David Robinson (who appeared with sketches and plans at many, many community meetings), and employees of the National Park Service.

After years of waiting and planning, many people expressed wonderment that the work had finally begun. The project is scheduled to be completed in late spring of 2004. 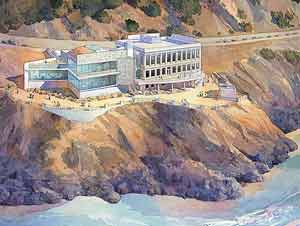 28 May 2002 - The Golden Gate National Recreational Area Advisory Committee meeting featured the latest news from the architect and project manager of the Cliff House renovation. Drawings and blueprints displayed the cleared-off rooftop, two new neon signs, a glass cube tower, and the new "Sutro Wing" addition clothed in green tile. Work is to begin in September and last about two years.

The public response consisted entirely of protests over the removal of the Musée Mécanique from its long time home in the Cliff House basement.

While a documentary project on the Musée's removal filmed away, Playland expert Peggy Vincent read from her well-written letter explaining why the Musée's location is integral to its historic importance.

Park Superintendent Brian O'Neill explained that the decision to move the Musée was made with public input in a 1993 study and report and that he believed Musée owner Ed Zelinsky supported the eventual new location on Merrie Way.

Questions about the Musée's interim location (either Pier 45 or the ferryboat Eureka), and the source of funding for the new building and visitor center planned are still up in the air.

1 April 2000 - The National Park Service held a colloquium today on the future restoration of the Cliff House. The current plan is to strip the additions around the original 1909 Reid Brothers design, and build a "21st Century" addition to the north that would feature a visitor center.

A representative of Save the Giant Camera spoke in favor of keeping the Whitney additions to preserve the "roadhouse style".