John Martini - "Above left is the downstairs dining room after demolition of part of the east wall. This wall obviously was a later addition, because once it was removed an additional portion of the ceiling was exposed, still in its original dark brown and gilt color scheme. The space between the two walls must have served as a storeroom for the restaurant, as indicated by the legends "Sauces" and "Seasonings" chalked on an overhead beam" 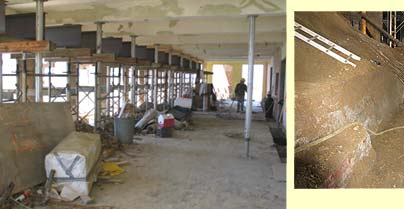 "This is the former location of the Musee Mechanique, looking north from approximately the location of the "animated carnival". The heavy bracing and I-beams at left supported the structure while a new foundation was being poured in this area.

"The shot on right shows a concrete retaining wall and part of the original hillside deep within the bowels of the building. The historical architect for the project believes this is the only remaining portion of the 1896 Cliff House."