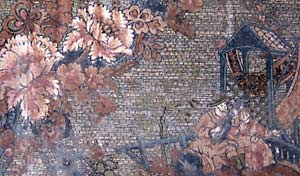 John Martini - "These views show some of the early remnants discovered on the second (i.e., middle) floor of the Cliff House.

"The wallpaper sample above was discovered under a later-addition wall, and most likely dates to the 1910s or '20s, while the mosaic floor from a long-vanished restroom is probably part of the original 1909 decor.