Retired Park Ranger John Martini shares some inside views of the Cliff House renovation project. Thanks to John for the photos and information! 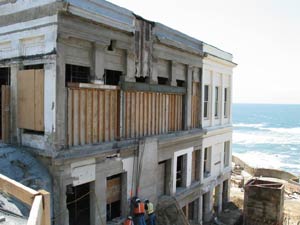 "This shows a portion of the original 1909 north facade of the Cliff House, exposed when the addition that housed the 'Phineas T. Barnacle' bar was demolished. This wall was covered over shortly after the Cliff House was completed and shows the original cornice, dentils, and other architectural elements around the windows. (Many of these details were knocked off when the Whitney Brothers 'upgraded' the Cliff House in 1937.) The large scar in the center of the unpainted portion marks the former location of a fireplace in the bar.Interestingly, it appears the 1909 Cliff House wasn't painted for several years -- at least up until the time this first addition was added in 1912.

"I like this view because it shows the evolution of the Cliff House's exterior: at center, the original unpainted 1909 building; at right, the painted facade as modified by the Whitney Brothers in 1937; and at left the main facade, which was further modified in 1949 when George Whitney added a redwood facade to the structure. (The imprint of the old cornice is clearly visible. The architects working on the remodel plan to replace the cornice on the front of the building.)" 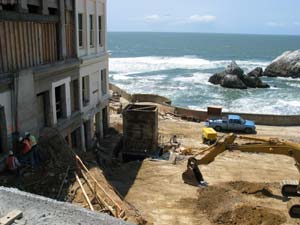 "This shows the former location of the old "north annex" and NPS visitor center after being demolished to make way for the new North Annex, which will house additional dining space. This photo was taken on the last day before construction work began on the new Annex."