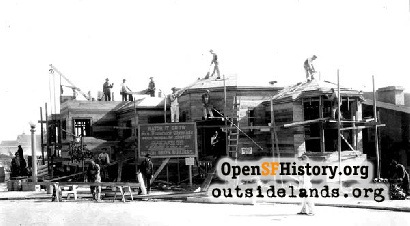 In 1922 the San Francisco Chronicle came up with a complicated contest to increase subscriptions and circulation.

The newspaper encouraged the public to have neighbors, relatives, friends, and business associates nominate prize winners on subscription forms to the Chronicle. Top vote-getters won gold coins and new automobiles, with the grand prize a $12,000 Westwood Park bungalow, built by Nelson Brothers over the course of the three-month contest.

The Chronicle reported on the construction progress of 598 Miramar Avenue almost daily, providing ample publicity for Nelson Brothers, the architect Charles F. Strothoff, and every contractor on the job who took out ads to promote their plumbing or electrical work on the "Wonder Bungalow." 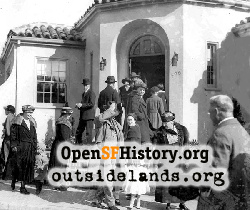 The "Chronicle House" open to the public in 1922. - Courtesy of Westwood Park Association

The winner was a Palo Alto businessman named Russell Terrell Wilson with a wife and two kids. In early April 1922, the family took a well-publicized first tour of their new home with photographers clicking away.